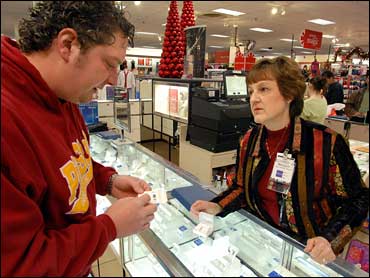 The nation's retailers are pulling out all the stops to hit their holiday sales goals by expanding hours in the final days before Christmas and ratcheting up discounts.

After a disappointing start to the month, stores are counting on procrastinators like Victor Mack and Sally Neal to make this a strong season.

"I come from a line of procrastination, mainly the men in my family," said Mack from Concord, N.C., who was buying an iPod Nano for his wife at the Apple store in Charlotte, N.C., earlier this week.

Neal, who was shopping in downtown Indianapolis, was about half done with her holiday shopping. "Since I work, it's just a matter of when I have time," she said. "So I don't get to shop for deals."

Clearly, winners and losers already have emerged. Deep discounting of flat-panel TVs led to a buying surge, as well as a profit blow to Best Buy Co. and Circuit City Stores Inc. Luxury stores' business has been sparkling as well-heeled shoppers are showing no restraint for $5,000 handbags.

Other mall-based stores have stuck to their already generous promotional calendar, keeping profits intact so far and refusing to buckle under pressures from shoppers to hold out for the best bargain. Stores were cautious when planning their holiday inventories this summer when gas prices were higher, fearing that shoppers would pull back. But even with declining gasoline prices and a steady job market, many shoppers have been selectively buying.

"I'd like to spend more, but I can only spend about three, four, five hundred dollars," said Ron LaJoy of Albany.

Many apparel chains, struggling with stiffer competition from department stores, could accelerate discounts this weekend beyond what they planned to lure buyers. With Christmas falling on Monday, Saturday is expected to be the busiest shopping day; that poses a risk to profits, since more sales will be done at discounted prices, said Dan Hess, founder and CEO of Merchant Forecast, a New York-based research firm. But stores are also hoping that shoppers who received gift cards will spend freely on full-price merchandise during the post-Christmas season, boosting fourth-quarter profits.

"Although the profit picture for consumer electronics is grimmer, all of retailing is going to suffer to a certain degree," said Hess. Based on a current check of about 40 mall-based stores, discounting is down from last year at this time, but he expects price-cutting will exceed last year's levels by this weekend. Department stores' profits should do well, while mall-based apparel stores should be mixed, he added.

In the season's final days, merchants are catering even more than ever to procrastinators who didn't have time or waited for the best deals. Mild weather also didn't motivate consumers to snap up winter items like snow boots.

According to a poll of 1,000 consumers conducted by Opinion Research Corp. for the International Council of Shopping Centers, four out of five households said they are shopping later this year than in 2005.

Orlando Veras, a Macy's spokeswoman, said that the decision to extend hours in Elmurst was based on local customers' requests and the test could be expanded to other stores next year. A handful of stores at the same Queens Center mall, including Limited Brands' Express, are planning to open 35 hours straight starting at 7 a.m. on Saturday, according to Dawn Simon, the mall's marketing manager.

For the first time, L.L. Bean's four stores in New Jersey, Maryland, Pennsylvania and Virginia are staying open about 189 hours straight through Christmas Eve Day according to Kathy Whitney, a company spokeswoman.

Sears Holding Corp.'s Sears, Roebuck and Co., which will be open from 5 a.m. to midnight on Saturday, will be giving out $10 reward cards for the first 50 customers.

Meanwhile, in cyberspace, Best Buy is dangling a new offer: if shoppers order merchandise by 3 p.m. on Dec. 24 on Bestbuy.com they can pick up their order in-store before the store closes at 5 p.m., according to Lauren Naru, a company spokeswoman.

Improved business in recent days has been encouraging. And some consumers were doing some buying for themselves.

"The Victoria's Secret, the Nordstrom nylons, the Macy's stuff and the $300 plus worth of clothing I spend up in Brass Plum — me," said Renee Gonzales, of Tukwila, Wash. "You've got to look out for number one, you know."

Taubman Centers, which operates or owns 23 malls in 11 states, reported that traffic has been up around five percent this week compared to a year ago.

The Chicago-based research company ShopperTrak RCT Corp. reported that thus far in the holiday shopping season, average weekly sales for December compared with 2005 are up 4.3 percent, approaching its projections for 5 percent sales growth.

"The question isn't whether the holiday season is going to be strong but could it have been stronger," said Scott Krugman, a spokesman at National Retail Federation, which is sticking to its projection of 5 percent growth in total holiday sales over a year ago.

Krugman added that consumers shopped early for nonseasonal items like hot toys and electronics, such as flat-panel TVs and digital cameras, but many held off on apparel.

Still, department stores, including Macy's and J.C. Penney Co., appear to be winning the game, thanks to improved fashions and industry consolidation.

But panic already seems to be hitting some stores. Struggling Gap Inc. took discounts this week on top of already deep price cuts. AnnTaylor Stores Corp.'s Loft has been touting a "buy any item, get one at 50 percent off" sale.

Still, many are counting on the post-Christmas surge of shoppers, who will be returning to stores armed with gift cards, whose sales are only recorded only when cards are redeemed.

Toys "R" Us, Inc. already started delivering new toys for 2007 this past week. But don't count on Terry Wilson, who was shopping in Nashville, Tenn.