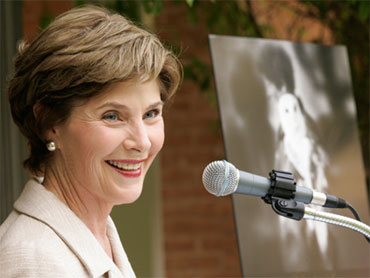 Former first lady Laura Bush on Monday expressed support for President Barack Obama's decision to speak to the nation's school children, saying it is "really important for everyone to respect the president of the United States."

In an interview with CNN, Mrs. Bush, a former school teacher, said, "There's a place for the president of the United States to talk to school children and encourage school children" to stay in school. And she said parents and others also need to send that message.

Mr. Obama's planned remarks Tuesday to be broadcast by C-SPAN to many schools across the country has drawn protests from conservatives and some parents who said the president is trying to indoctrinate the nation's children. Some parents have said they plan to keep their children home from school because of the Obama speech.

"That's their right," Mrs. Bush said. "That certainly is the right of parents to choose what they want their children to hear in school."

"I also think it's also really important for everyone to respect the president of the United States," she said.

Mr. Obama in his speech will urge students to stay in school.

"What you make of your education will decide nothing less than the future of this country," Mr. Obama will tell the students, according to a transcript released Monday by the White House. "What you're learning in school today will determine whether we as a nation can meet our greatest challenges in the future."

Mrs. Bush praised Mr. Obama's performance under difficult circumstances. "He's tackled a lot to start with and that's made it difficult," she said.

She said her husband has refused to criticized Mr. Obama because he believes the new president "deserves the respect and no second guessing on the part of a former president."

Still, she said Vice President Dick Cheney, who has been sharply critical of Mr. Obama, "has every right to speak out. ... It's certainly Vice President Cheney's right to say whatever he wants to say."

Mrs. Bush was interviewed in Paris, where she was helping promote global literacy as part of a United Nations meeting.