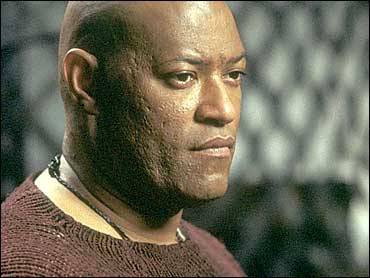 "Matrix Revolutions" marks the third and final installment of the science fiction epic that began with "The Matrix." Laurence Fishburne continues his starring role as Morpheus, the keeper of faith, in a war that threatens the future of human civilization.

"This movie reflects the world we live in," Fishburne tells The Early Show co-anchor Harry Smith. "The world is multicultural and multiracial and has women in it who do things that are not traditionally done by women and men in nontraditional roles. For example, Morpheus isn't in the driver's seat, doesn't have all of the answers and has to follow as opposed to lead."

Fishburne notes the "Matrix" films have been designed for people who want to enjoy the ride, whether they desire to be intellectually engaged or not.

For Fishburne, it definitely has been a ride. He has been acting since he was a kid, and he says his career has exceeded his expectations. He says, "It has turned out far better than I could have imagined, and that is because I put my faith and my trust in the Creator, and the Creator has carried me to this place, and I'm eternally grateful."

Now that the trilogy is complete, he says he is "very pleased, honored, surprised."

Who knew? Andrew and Larry Wachowski were not well-known prior to the film, Fishburne says, "Yeah. These guys from Chicago who were carpenters, who are brilliant writers, who have an incredible boundless imagination and they created this fantastic story, that seemingly has no end, although this is the end in terms of film."

By recent accounts, Fishburne says there are 1,100 unofficial fan sites. Asked if he suspects the Wachowski brothers will make another film, Fishburne says, "I don't know if they'll make another one. But I do know that this story has really resonated for people all around the world, and I'm glad that I was a part of it."

But this is not the end of the story. For the fans, Fishburne tells us the brothers are working on an interactive game that multiple players will be able to play on the Internet.

Some Facts About Laurence Fishburne