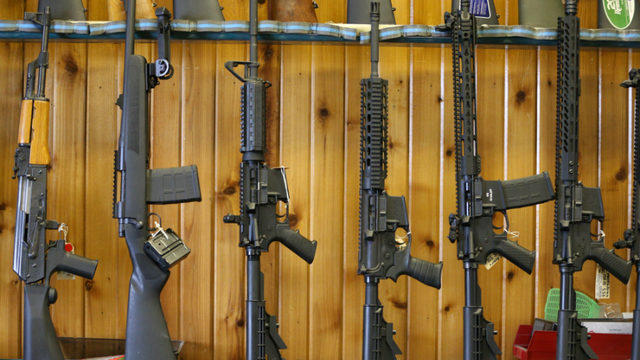 SEATTLE  - When law enforcement agencies in Washington and other states sell guns they've confiscated during criminal investigations, they're not just selling pistols and hunting rifles, they're also putting assault weapons, including AR-15s, back on the street.

Sheriff's offices and police departments across Washington state have sold dozens of AR-15s, AK-47s and other assault weapons since 2010, an Associated Press investigation found. More than a dozen of the weapons sold by law enforcement since have been used in new crimes-- and while none was an assault rifle, many fear it's only a matter of time.

Most states allow law enforcement agencies to decide whether to sell, trade or destroy their confiscated firearms, but a growing list of states has passed laws in recent years requiring agencies to sell all forfeited guns. Supporters say selling seized guns provides law enforcement with needed revenue, and if the practice were abandoned, people would just buy weapons somewhere else.

The Washington State Patrol, which is required by law to auction or trade most of its confiscated guns, traded a Colt .223-caliber AR-15 in 2014, an SKS assault rifle in 2012 and an AK-47 Russian assault rifle in 2014. They were then sold to the public.

The State Patrol's latest trade was with a gun dealer in Knoxville, Tennessee, in December. The batch of 331 guns included five assault rifles.

"The fact that Washington state is acting as an arms dealer terrifies me," said Democratic Rep. Tana Senn of Bellevue, who has sponsored a bill that would allow the patrol to destroy seized guns. "I don't think that should be their role."

Police and sheriff's offices in other states that require law enforcement to sell guns - including Arizona, North Dakota, and Georgia - also have sold assault weapons, the AP found.

Assault rifles are the weapons of choice in mass shootings. An AR-15-style assault rifle was used in this month's deadly shooting at a Florida high school, as well as mass shootings at a Las Vegas music festival; a Texas church; an Orlando, Florida, nightclub; a San Bernardino, California, social services center; a Newtown, Connecticut, elementary school; and an Aurora, Colorado, movie theater.

AR-15s and other assault-style weapons were fashioned after military rifles, but were made lighter for civilian use. They are semi-automatic weapons that shoot high-velocity ammunition, which causes significant damage. They're designed to accept high-capacity magazines that can hold up to 30 rounds.

In Washington, the Spokane County Sheriff's Office sold a DPMS Panther AR-15 in 2016. The agency sells its confiscated guns through a Post Falls, Idaho, auction house. The Thurston County Narcotics Task Force sold two AR-15s in 2010. One went for $250, and the other for $370.

The Spokane Police Department, which sold three assault weapons since 2011, says it's OK with putting the rifles out there.

The department "is concerned about anyone resorting to acts of violence regardless of the weapon they use," said agency spokesman John O'Brien. "Our procedure to sell long rifles through an ATF-monitored process to a FFL (Federal Firearms License) dealer follows city and state law and upholds the Constitution."

One Michigan law enforcement official said his agency decided to destroy its confiscated guns out of fear one might be used in a mass shooting.

Platt Weinrick, with the Michigan State Police forfeited weapons unit, said about a year ago his unit was looking for a new way to deal with confiscated guns and began asking agencies across the country what they did. He heard from some who said they destroyed them "because they didn't want to have issues like the Sandy Hook shooting, and have it traced back" to their departments.

"That is the type of thing that could happen, where an agency sells a gun, makes a profit, and it gets used by a criminal," Weinrick said.

When North Dakota passed its law in 2015, it included language that neither the state nor any officers or employees would be liable for injuries or damage to property "arising from the sale or disposal of a firearm."

Washington's law requiring the State Patrol to auction or trade confiscated guns has no liability language.

A bill being considered at the Washington Legislature would allow the patrol to destroy seized guns, but it's stalled in the House.

The State Patrol hadn't sold any weapons since 2014 and at one point stockpiled about 400 in the hope the Legislature would change the law and let the agency destroy them. But when lawmakers failed to act last year, the agency traded 330 weapons with a Tennessee gun dealer, who supplied the State Patrol with AR-15s.

"We have to follow the law of the land, and it would be up to state lawmakers to allow us to destroy weapons," State Patrol spokesman Kyle Moore said Wednesday.

In addition, the law doesn't differentiate between different types of weapons, he said: "We have to sell them all."