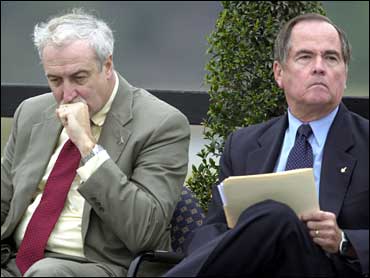 NASA's top official assured Congress Wednesday that mission controllers detected no unusual readings from Columbia suggesting the crew's lives were threatened in the days preceding its mysterious breakup over Texas.

Sean O'Keefe, who recently took over as head of the National Aeronautics and Space Administration, also promised that investigators will discover the cause of the accident that killed seven astronauts and that a review board will operate without interference from NASA insiders.

O'Keefe pledged that the findings of the independent panel will be made public "as soon as the ink is dry." He said he would not add anything to the panel's report before its release.

Lawmakers questioned O'Keefe about damage to the shuttle's thermal tiles, the age of the spacecraft, and in-flight escape plans, CBS News Radio reports.

"I'm, quite frankly, disappointed that 17 years after the Challenger accident, so little attention has been given to developing crew escape systems for our astronauts," said Rep. Ralph Hall of Texas, the ranking Democrat on the House Science Committee.

O'Keefe said NASA had no signs from Columbia itself that its delicate thermal tiles might have been damaged on liftoff. Cameras captured a chunk of foam from the shuttle's external fuel tank as it broke away at liftoff and appeared to strike Columbia's left wing.

"If there was any indication, they likely would have showed up during that 16-day mission," O'Keefe told Sen. John Breaux, D-La. He said there were "no abnormalities that would suggest the problem."

Asked whether the age of Columbia — the oldest of NASA's four shuttles — might have played a role, O'Keefe noted that Columbia's airframe and other systems were inspected rigorously before each mission.

"The age factor, again the investigation may prove that was a contributor," O'Keefe said, "but in terms of our efforts to make sure that wasn't a factor, it appears every element of diligence was done."

O'Keefe said the space agency is committed to future flights but does not know when they can resume. He said that NASA's schedule for shuttle missions — which anticipated five flights starting in fiscal 2004 — will be "adjusted as needed once we determine when we can return to flight."

"We know the lesson from this terrible accident is not to turn our backs on exploration simply because it is too hard or risky," O'Keefe said of the Feb. 1 disintegration of the shuttle as it was returning to Earth.

O'Keefe said that during the 16-day mission, "we had no indications that would suggest a compromise to flight safety."

Lawmakers from House and Senate space panels pressed O'Keefe about whether a review board appointed to investigate the Columbia accident will be sufficiently independent.

"You have our assurance that this distinguished board will be able to act with genuine independence," O'Keefe said.

O'Keefe called the board's members — led by retired Navy Adm. Hal Gehman — "some of the best in the world at what they do," adding that they have been involved in 50 major investigations among them. They began meeting within 30 hours of Columbia's loss, he said.

Sen. Ted Stevens, R-Ala., told colleagues he considered O'Keefe "one of the closest friends I have in the world," and praised O'Keefe for his "integrity, complete honesty and openness."

The chairman of the House Science Committee, Rep. Sherwood Boehlert, R-N.Y., said he thinks the investigative board's charter must be rewritten because it does not guarantee sufficient independence.

"The charter's words need to match everyone's intent now to avoid any problems later," Boehlert told O'Keefe. "It's essential that we maintain the independent nature of the board."

Gehman, speaking to reporters Wednesday before departing for Kennedy Space Center in Florida, said he anticipated the debate in Washington about the independence of his panel.

"There is no question of the independence of this panel," he said. "The only question is who do we send our report to."

Sen. Ernest Hollings of South Carolina, ranking Democrat on the Senate Commerce Committee, said that as the investigation goes forward, "the government needs to focus the examination more squarely on how the exterior of the shuttle spacecraft may have failed and caused this catastrophic accident."

O'Keefe has fought to keep the Columbia investigation out of the hands of a presidential commission, such as the one that investigated the destruction of the space shuttle Challenger in 1986.