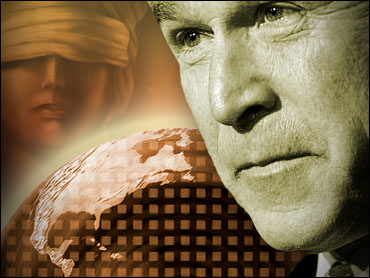 The Bush administration is quietly reshaping environmental policy to expand logging and other development by settling a series of lawsuits, many of them filed by industry groups.

As a result of settlements, the administration has announced plans to remove wilderness protections from millions of acres of land in Utah. It also agreed to review protections for endangered species such as salmon and the northern spotted owl, reversed a Clinton-era ban on snowmobiles in Yellowstone and Grand Teton national parks and softened rules on logging.

None of the decisions were subject to prior public comment or congressional approval.

"I don't know if it's a policy, but it's definitely a pattern," said Kristen Boyles, a lawyer for the environmental group Earthjustice, who has frequently battled the Bush administration in court.

"The industry sues and then the current administration does a poor job of defending itself or comes to a sweetheart settlement," Boyles said.

CBS News legal analyst Andrew Cohen points out that, "This collusion claim is very hard to prove because it requires getting into the minds of the lawyers and officials involved. But federal judges in particular absolutely have to be more diligent about scrutinizing these settlements before accepting them. Once they are accepted they are virtually impossible to get around.

"IF this is happening-- and right now that is a big if-- it's illegal and unethical and you would think that both the legislative branch and the judicial branch would want to do something to stop it. Congress could clarify environmental laws and policies and judges could look much more closely about whether these settlements are reasonable or motivated by political gain.

"It's difficult, it might even be impossible, to separate out the politics involved in these lawsuits and settlements from the LAWS involved in them. It would just about take a smoking-gun sort of memo from an Administration official to a litigant to prove collusion and I cannot imagine that such a memo exists," Cohen continues.

Last month, several environmental groups filed a federal lawsuit claiming the administration and the timber industry have been holding secret talks to undermine the Northwest Forest Plan. The suit seeks access to settlement documents under the Freedom of Information Act.

"No litigation is friendly," he said.

But critics suggest the administration is using the lawsuit settlements as an end-run around Congress, which has blocked some parts of the Bush agenda, including efforts to open Alaska's Arctic National Wildlife Refuge to oil drilling and the Healthy Forests Initiative, which would increase logging in national forests to reduce the risk of wildfires.

"In the guise of settling lawsuits, federal officials have retired to the back room to work out deals that sacrifice our old-growth forests, salmon and clean water for the sake of clearcutting our public lands," said Patti Goldman of Earthjustice, one of the plaintiffs in the freedom of information case.

In recent weeks, the administration has settled several industry challenges to the Northwest Forest Plan, which governs logging and habitat protection for salmon and other threatened species. Among other actions, the government agreed to review Endangered Species Act protections for the northern spotted owl and marbled murrelet, birds that are icons of the Northwest timber wars. In a separate action, officials have proposed weakening some salmon protections to boost logging.

The National Park Service also has allowed snowmobiles in Yellowstone and Grand Teton national parks, and the Agriculture Department declined to defend the "roadless" rule, a Clinton-era policy that blocks road-building in remote forest areas.

Last week, the Interior Department announced that in response to a lawsuit it intends to halt all reviews of its Western land holdings for new wilderness protection and to withdraw that protected status from some 3 million acres in Utah. That settlement was approved by a federal judge on Monday, three days after it was filed.

Rey, a former timber industry lobbyist, said officials are doing nothing the Clinton administration didn't do in the 1990s.

"I understand why they're unhappy," Rey said of critics, "but their unhappiness needs to be measured in balance to the situation they enjoyed when people who agreed with them more often than not were in this position."

"I do not know of any instance where the Clinton administration said, 'You sue us, and we'll settle and we'll stop a timber sale.' It hasn't happened in this office," said Boyles of Earthjustice.

Each of the settlements the Bush administration agrees to is presented to a judge and will be subject to public comment. Rey said they will be judged on their merits.

"Nobody gets frozen out of our actions because the public ultimately is going to get a chance to comment. If they are dissatisfied, they will get their own opportunity to sue," Rey said.

But environmental groups call the comment period a formality, which rarely produces any substantive change in the settlement.

Chris West of the American Forest Resource Council, a Portland, Ore.-based timber group which has filed several of the lawsuits, denied any collusion in the litigation.

He said Mr. Bush is "just trying to put some balance into how these forests are managed," noting that logging in the Northwest has dropped in the past decade to less than a third of the volume recommended by the Northwest Forest Plan.