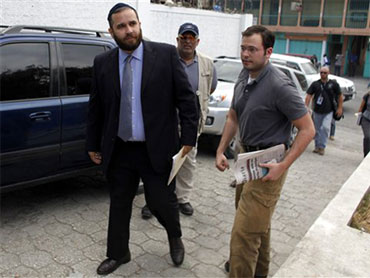 Dominican police have arrested a fugitive who acted as the lawyer for U.S. missionaries accused of kidnapping 33 Haitian children.

Jorge Puello initially served as the group's legal adviser and spokesman but authorities later said he was wanted for trafficking women and children in the U.S. and El Salvador.

The National Drug Control Agency says the 32-year-old Puello was arrested in the parking lot of a fast food restaurant late Thursday in the Dominican capital, Santo Domingo.

Soledad Puello is his mother. She told The Associated Press that she and others had negotiated with Salvadoran prosecutors for Puello to turn himself in.

Puello was born in New York but has both U.S. and Dominican citizenship.