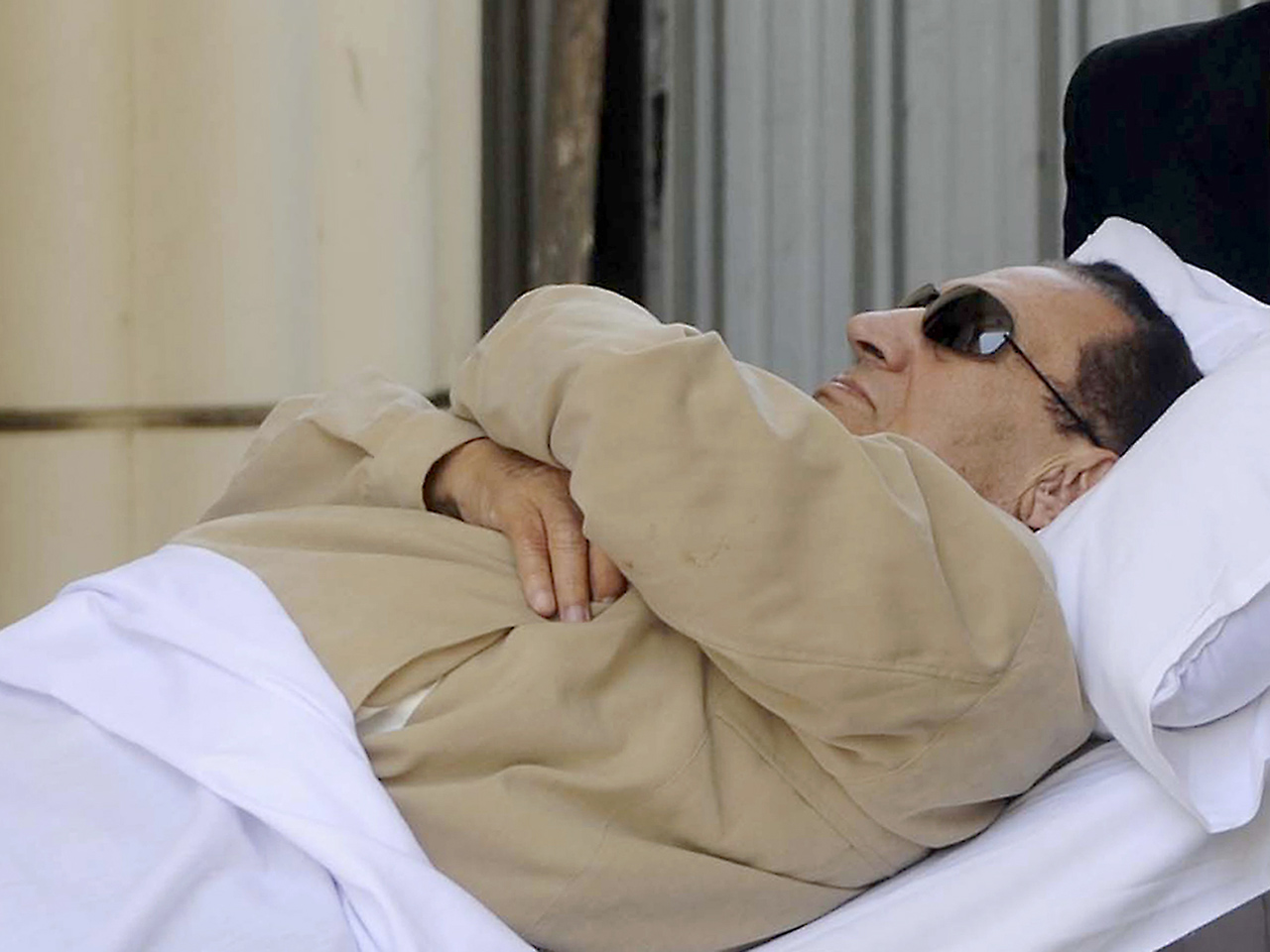 (AP) CAIRO - Hosni Mubarak's condition stabilized Tuesday but his lawyer said the 84-year old former president does not trust his doctors in the prison hospital and fears they are out to kill him.

There have been conflicting reports about Mubarak's condition since a court convicted him on June 2 of failing to prevent the killings of protesters in the uprising that ousted him last year. He was sentenced to life in prison.

Since his arrival at the prison, the 84-year old Mubarak has been suffering from high blood pressure and breathing difficulties and is diagnosed with deep depression, according to security officials at Torah prison. On Monday, doctors used a defibrillator on him twice after they could not find a pulse.

In a late night TV program Monday, Mubarak's lawyer Farid el-Deeb said he had asked concerned authorities to transfer Mubarak to a better equipped military hospital because of his fragile health. El-Deeb painted a picture of a paranoid man who does not trust the medical team in the prison and who has at times resisted their instructions. He was speaking on CBC, a private TV station.

"Mubarak doesn't trust anyone anymore. He was surprised to find new doctors treating him, not the ones who treated him before, and is afraid to take anything from anyone. He doesn't recognize the faces around him. This is a big problem for him," el-Deeb said.

At one point, Mubarak told his lawyer that he fears his doctors are out to kill him.

"'Help me Farid,' he said in a very faint voice," el-Deeb quoted Mubarak as saying. "He said: `I'm uncomfortable and I don't feel safe. I feel they are ordered to kill me."'

The lawyer said the decision to transfer him to the prison hospital was a surprise to him and his team, because despite pressure from parliament and protesters to transfer Mubarak to prison, his doctors had said his condition does not permit it.

Since he was detained in April 2011, Mubarak had spent time in a luxury suite of a hospital in the Red Sea resort of Sharm el-Sheikh. He was later transferred to a military hospital on the outskirts of Cairo after his trial began in August, where he was regularly visited by family, and where he was said to have exercised and appeared in pictures on his feet, unlike his appearances in court on a hospital bed.

After he was sentenced, Mubarak refused to leave the helicopter that transferred him to the south Cairo prison premises for hours. Security officials said he cried in protest.

The decision to transfer Mubarak to another hospital is a minefield, and authorities seem to be dragging their feet to avoid a new explosion of public anger.

A new round of protests erupted right after the Mubarak verdict because he and his two sons were acquitted of corruption charges that were part of the same case. While Mubarak and his top security chief got life in prison, six top police commanders were acquitted on the charges of complicity in the killing of protesters during the uprising.

A prosecution official said that it is up to the prison authorities to decide whether Mubarak needs to be transferred to another hospital. They would be held responsible if they fail to act in due time, said the official speaking on condition of anonymity because he was not authorized to address the media.

Alaa Mahmoud, spokesman for the Interior Ministry, said Mubarak's condition is stable but that he is not well. He said there has been no decision yet to transfer him to another hospital and that medical doctors from the police academy and the prison are monitoring his condition.

Medical officials said Mubarak's condition had improved by Tuesday and he was administered oxygen to aid his breathing once for five minutes. They said they are monitoring his heart and blood pressure closely and he is in intensive care. The officials spoke on condition of anonymity because they were not authorized to talk to the media.

Many Egyptians accused authorities of showing Mubarak too much reverence. Others continue to see him as a decorated war hero whose old age and service to Egypt are grounds for leniency.

El-Deeb visited Mubarak in the Torah prison hospital on Saturday. He said during his 90 minutes visit, Mubarak slipped in an out of consciousness three times. He described a medical facility that is not equipped to deal with his client's critical condition, despite a $1 million renovation to accommodate the ousted leader.

El-Deeb told the CBC station that on his first night in the prison hospital, the doctors couldn't operate the machine to administer oxygen to Mubarak.

"This can't be called a hospital. I saw it for myself," el-Deeb said.

Egypt's public health system under Mubarak was seriously debilitated, and its reform is one of the top demands of the protest movement that ousted him.

Mubarak's health condition, just like the verdict against him, has consumed public debate in Egypt as the country's is seething with political uncertainty ahead of a presidential runoff election on Saturday and Sunday.

Mubarak's last Prime Minister Ahmed Shafiq is facing off against a leading member of the Muslim Brotherhood, once Mubarak's most organized opposition. The contest has deeply polarized the country. Mubarak's death or transfer to a hospital outside of prison could further enflame public anger.

Mubarak's two sons, onetime heir apparent Gamal and wealthy businessman Alaa, were at his bedside, security officials said on condition of anonymity because they were not authorized to speak to the media. The sons also are being held at the prison, awaiting trial on insider trading charges after they and their father were acquitted June 2 of corruption charges.

His lawyer drummed up Mubarak's military career to ask for his transfer to a military hospital. He said he is considering appealing to international human rights organizations to check on Mubarak's condition because he feared he could die in prison.