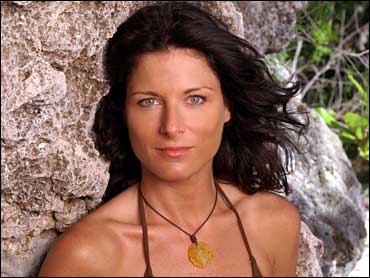 In an eleventh-hour shocker, Wisconsin research assistant Leann Slaby was voted off the island in Thursday's episode of "Survivor: Vanuatu."

The contestants gave thanks for e-mail messages from home, but some of the women decided to abandon the all-women's alliance for Chris, the lone remaining man.

The remaining seven players battled each other for the $1 million prize.

Chris knew the only way he could remain on the island was to win immunity in the blindfolded puzzle challenge, during which the players were paired up with a loved one.

The first to complete the puzzle would win immunity. But Chris' efforts fell short, and Ami won immunity in tribal council.

Chris scrambled among the women hoping to forge a last-minute alliance. Convinced that he'd broken up the women's alliance, and created one for himself, Chris headed into tribal council.

This time, his efforts paid off, and Leann was voted off the island.

"As soon as I saw my name for the first time, I knew something went terribly wrong because I wasn't part of the mix at all," Leann told co-anchor Julie Chen during her morning-after interview on The Early Show.

"I shouldn't of come up at all," she explained, saying she thought the group had decided to vote off Eliza. "I knew from the beginning that Scout and Twila couldn't stand Eliza, so they wanted to get her off, every single opportunity they could. So this time, we decided, you know, we all decided to keep Chris around because Eliza does nothing, the smaller the numbers are, the more help you need around camp, let's keep him around for one more round. And there is no mention of anything else and everybody was cool with that and Scout and Twila thought, you know, great."

She added, "We had a plan, and I was sure of it and that was my downfall, I was too sure of it."

Despite the fact that she might have saved herself by winning immunity, Leann was able to laugh at how badly she and her friend performed in the challenge.

"I had fun. It was great seeing her, and I loved it, and we are just a couple of dorks that couldn't do very well."