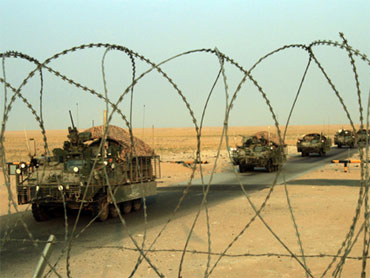 As their convoy reached the barbed wire at the border crossing out of Iraq on Wednesday, the soldiers whooped and cheered. Then they scrambled out of their stifling hot armored vehicles, unfurled an American flag and posed for group photos.

For these troops of the 4th Stryker Brigade, 2nd Infantry Division, it was a moment of relief fraught with symbolism. Seven years and five months after the U.S.-led invasion, the last American combat brigade was leaving Iraq.

Iraq Withdrawal: What are Non-Combat Troops?

According to the Pentagon, the combat mission isn't over, and it won't be until the end of the month, as planned. CBS News correspondent Whit Johnson reports that 6,000 combat troops will stay in the country until that deadline is met, according to defense officials.

"To say the combat mission has come to an end because this brigade pulled out" is wrong, Pentagon spokesman Bryan Whitman told CBS News.

"We still have plenty trigger pullers there," a U.S. Army spokesman told CBS on Wednesday evening.

Anther 50,000 troops will stay in Iraq for a year, beginning in September, in what is designated as a noncombat role. They will carry weapons to defend themselves and accompany Iraqi troops on missions (but only if asked). Special forces will continue to help Iraqis hunt for terrorists.

U.S. officials close to the Obama administration's Iraq planning, meanwhile, have told the New York Times that a swarm of civilian diplomatic and security workers will soon be faced with the daunting task of keeping both themselves and the Iraqi people safe, as American troops prepare to leave the still-fragile democracy behind.

Lanza, speaking via satellite from Baghdad, said he was confident the Iraqi security forces were ready to protect their country.

He praised the Iraqi soldiers and national police for showing a "commitment to abide by the Iraqi constitution" and to remain above the divisive politics that have blocked the country from forming a stable new government, five months after national elections.

"They have shown they can secure the country for the election," said Lanza, adding that the Iraqis have exhibited "the will, the professionalism and the ethos," to take over from the Americans.

When 18-year-old Spc. Luke Dill first rolled into Iraq as part of the U.S. invasion, his Humvee was so vulnerable to bombs that the troops lined its floor with flak jackets.

Now a 25 and a staff sergeant after two tours of duty, he rode out of Iraq this week in a Stryker, an eight-wheeled behemoth encrusted with armor and add-ons to ward off grenades and other projectiles.

"It's something I'm going to be proud of for the rest of my life - the fact that I came in on the initial push and now I'm leaving with the last of the combat units," he said.

He remembered three straight days of mortar attacks outside the city of Najaf in 2003, so noisy that after the firing ended, the silence kept him awake at nights. He recalled the night skies over the northern city of Mosul being lit up by tracer bullets from almost every direction.

Now, waiting for him back in Olympia, Wash., is the "Big Boy" Harley-Davidson he purchased from one of the motorcycle company's dealerships at U.S. bases in Iraq - a vivid illustration of how embedded the American presence has become since the invasion of March 20, 2003.

The Stryker brigade, based in Joint Base Lewis-McChord in Washington state and named for the vehicle that delivers troops into and out of battle, has lost 34 troops in Iraq. It was at the forefront of many of the fiercest battles, including operations in eastern Baghdad and Diyala province, an epicenter of the insurgency, during "the surge" of 2007. It evacuated troops at the battle of Tarmiyah, an outpost where 28 out of 34 soldiers were wounded holding off insurgents.

Before the Aug. 31 deadline, about half the brigade's 4,000 soldiers flew out like most of the others leaving Iraq, but its leadership volunteered to have the remainder depart overland. That decision allowed the unit to keep 360 Strykers in the country for an extra three weeks.

U.S. commanders say it was the brigade's idea, not an order from on high. The intent was to keep additional firepower handy through the "period of angst" that followed Iraq's inconclusive March 7 election, said brigade chief, Col. John Norris.

It took months of preparation to move the troops and armor across more than 500 kilometers (300 miles) of desert highway through potentially hostile territory.

The Strykers left the Baghdad area in separate convoys over a four-day period, traveling at night because the U.S.-Iraq security pact - and security worries - limit troop movements by day.

Along the way, phalanxes of American military Humvees sat at overpasses, soldiers patrolled the highways for roadside bombs, and Apache attack helicopters circled overhead as the Strykers refueled alongside the highway.

Chief Warrant Officer 3 Gus McKinney, a brigade intelligence officer, acknowledged that moving the convoys overland put soldiers at risk, but said the danger was less than in past.

The biggest threat was roadside bombs planted by Shiite extremist groups who have a strong foothold in the south, McKinney said.

But except for camels straying into the road, and breakdowns that required some vehicles to be towed, there were no incidents.

The worst of the ride was conditions inside the Strykers - sitting for hours in a cramped space - and the temperatures outside that reached 120 Fahrenheit.

The driver's compartment is called the "hellhole" because it sits over the engine and becomes almost unbearably hot. The vehicle commander and gunner can sit up in hatches to see the outside world. At the tail end are hatches for two gunners. Eight passengers - an infantry squad in combat conditions - can squeeze in the back.

Riding as a passenger felt a bit like being in a World War II-era submarine - a tight fit and no windows. The air conditioning was switched off to save fuel on the long ride south to Kuwait. Men dozed or listened to music on earphones.

When the convoy finally reached the sandy border, two soldiers, armed and helmeted, jumped off their vehicle and raced each other into Kuwait.

Once out of Iraq, there was still work to be done. Vehicles had to be stripped of ammunition and spare tires, and eventually washed and packed for shipment home.

Meanwhile, to the north, insurgents kept up a relentless campaign against the country's institutions and security forces, killing five Iraqi government employees in roadside bombings and other attacks Wednesday. Coming a day after a suicide bomber killed 61 army recruits in central Baghdad, the latest violence highlighted the shaky reality left by the departing U.S. combat force and five months of stalemate over forming Iraq's next government.

For Dill, who reached Kuwait with an earlier convoy, the withdrawal engendered feelings of relief. His mission - to get his squad safely out of Iraq - was accomplished.

Standing alongside a hulking Stryker, his shirt stained with sweat, he acknowledged the men who weren't there to experience the day with him.

"I know that to my brothers in arms who fought and died, this day would probably mean a lot, to finally see us getting out of here," he said.