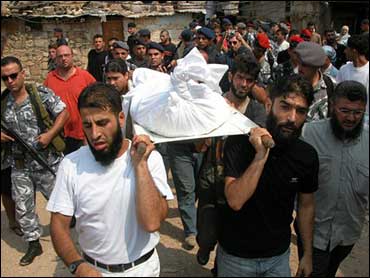 Lebanese troops killed 28 al Qaeda-inspired militants and captured 15 others in a massive gunfight Sunday after they broke out of a northern Palestinian refugee camp devastated by over three months of fighting, said a senior security official.

The official, speaking on condition of anonymity because no official casualty figure was released, could not confirm earlier reports that 15 Fatah Islam fighters were wounded in the battle.

A military statement earlier said troops were attacking the remaining militant strongholds inside Nahr el-Bared and "chasing the fugitives outside the camp" who had staged "a desperate attempt to flee." It called on Lebanese citizens to inform the nearest army patrol of any suspected militants in their area, but gave no specifics on casualties except saying "a large number" had been killed or captured.

The gunbattles that began during the dawn breakout continued through early afternoon, with troops chasing Fatah Islam fighters in buildings, fields and roads around Nahr el-Bared camp, residents and television stations reported.

Other Lebanese security officials, who spoke on condition of anonymity for the same reason, said two Lebanese soldiers were killed in the fighting, raising to 155 the total number of troops who have died in the conflict.

Before Sunday's battle, Lebanese officials had said up to 70 Fatah Islam fighters remained in the camp. When the fighting broke out more than three months ago, the number was estimated at 360.

Sunday's developments indicated the battle was almost over for the camp, large parts of which have been reduced to rubble.

According to security officials and television reports, the breakout began early Sunday when a group of militants sneaked through an underground tunnel to an area of the camp under army control and fought with troops. At the same time, another group of militants struck elsewhere to try to escape, reportedly receiving help from militants outside the camp.

State-run Lebanese television said the militants inside the camp were aided by outside fighters who arrived in civilian cars to attack army positions around the camp.

State television reported Lebanese residents of nearby villages, armed with guns and sticks, fanned out to protect their houses and prevent militants from seeking refuge and melting into the local population.

Meanwhile, troops searched fields and houses near the camp early in the afternoon looking for fugitives, according to TV footage and local residents. Smoke billowed from a field near the camp where residents said the army set fire to bushes to deny militants a hiding place.

Even in the Lebanese capital Beirut, over an hour's drive to the south, officials searched vehicles at military checkpoints set up on major streets. Other checkpoints were erected along the coastal highway linking the north with Beirut, causing traffic jams.

Army officials and the senior security official said they did not know whether Fatah Islam leader Shaker al-Absi was among those who attempted to break out. Al-Absi has not been seen or heard since early in the fighting.

But Al-Jazeera television said al-Absi had escaped one army cordon and was within the second wider cordon, where troops were searching for him.

Fighting erupted May 20 between troops and Fatah Islam militants holed up in Nahr el-Bared camp near Tripoli, becoming Lebanon's worst internal violence since the 1975-90 civil war. The battles have killed more than 20 civilians and scores of militants. Families of the militants — women and children — were evacuated late last month, the last civilians to leave the camp.

Prior to Sunday, the army had inched its way into the camp under artillery and rocket fire, destroying buildings and capturing militants' fortified positions one by one while facing tough resistance from the Islamic fighters.

In recent days, the army has cornered the militants in a small area of the camp and has been pounding it with bombs dropped by helicopters.