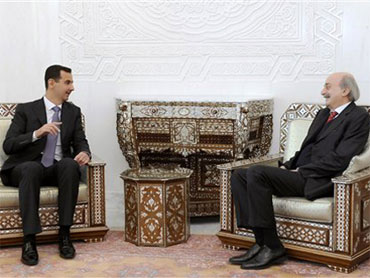 Syrian President Bashar Al-Assad met with Lebanese Druze leader Walid Jumblatt Wednesday to draw to a close a five-year row with one of his staunchest former critics in Lebanon who only just acknowledged his comments about Damascus were "improper."

A longtime leftist and a one-time close Syrian ally, Jumblatt, 60, shifted his stance and became the main force behind the creation of a Western-backed alliance that led massive street protests to demand the withdrawal of Syrian troops from Lebanon following the assassination of former Lebanese Prime Minister Rafik Hariri in 2005.

Many Lebanese blamed Syria for his death. Syria denies any role in the killing, which is being investigated by a special tribunal set up by the United Nations in 2006.

The Syrians pulled their army out of Lebanon two months later, ending nearly three decades of military presence in their smaller neighbor.

Jumblatt was only informed about the meeting Tuesday evening and made his way to the Syrian capital early Wednesday morning.

"Assad and Jumblatt discussed the historic and brotherly ties binding Syria and Lebanon and the importance of strengthening relations to enable both countries to face joint challenges and serve the interests of the two people and fundamental Arab issues," a terse statement by Syria's presidential palace said.

"The meeting reviewed the importance of the role of the resistance which represents a assurance in the face of Israel-led schemes that target the whole Arab region," it said, adding the Druze leader lauded Assad's "keenness" for the security and stability of Lebanon.

A shrewd politician known for his shifting loyalties, Jumblatt walked out of the Western-backed coalition last year and said he will take a neutral stance in Lebanese politics.

Jumblatt has also reconciled with Hezbollah leader Hassan Nasrallah. Nasrallah was said to be working for reconciliation between the Druze leader and Syria.

But to earn his ticket for Damascus, the Druze leader needed to apologize live on television for the verbal attacks he gave over the past few years.

"Those comments were improper, unfamiliar and unsuited to political ethics," Jumblatt said in a live interview with al-Jazeera a week ago. "I said, at a moment of anger, what is improper and illogical against President Bashar Assad. It was a moment of ultimate internal tension and division in Lebanon," calling on the Syrian resident to turn the page on the past.

Tensions between Jumlatt's Druze followers and his allies on one side and Nasrallah's Shiite militia erupted in street fighting in Beirut in May 2008, killing 81 people and nearly plunging Lebanon into another civil war. Jumblatt has since moderated his anti-Syria rhetoric.

Hezbollah, which fought a month-long war with Israel in 2006, is seen across the Arab world as a resistance movement but is also a political party and holds two ministerial portfolios in the unity government of Sa'ad Hariri, son of the murdered premier.

The Druze are an offshoot of Islam, comprising less than 10 percent of Lebanon's population. They have traditionally punched above their weight, leading a major revolt against French mandate rule in the 1920s.

Jumblatt, however, is not the only one to knock on Syrian's door for reconciliation with a forget-about-the-past message. An experienced politician, he must have sensed that Assad's star was really on the rise.

Sa'ad Hariri did exactly the same, ordering his followers, moreover, to put an end to their hostility against Damascus or quit his movement. There's no question the rapprochement between Syria and Saudi Arabia last year has eased tension.

The Bush administration withdrew its ambassador from Damascus five years ago. Recently, the Obama administration said it wanted to send Robert Ford as a new envoy in the Syrian capital.

Massachusetts Democratic Sen. John Kerry is expected to come to Syria Thursday for talks with Assad on the deadlocked Middle East peace process. Kerry met with al-Assad just over a year ago.