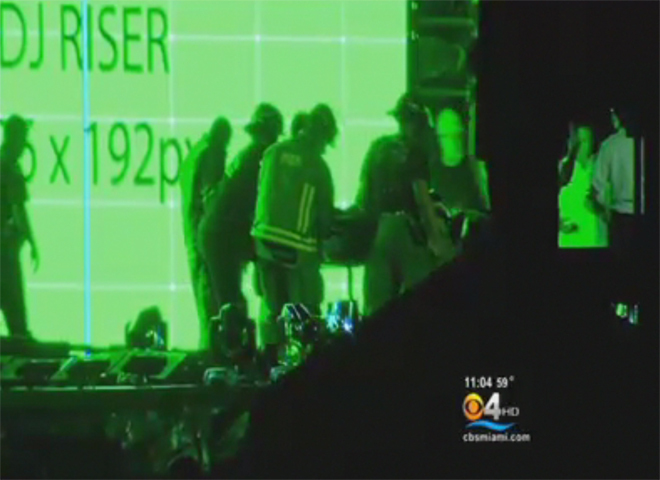 Fire rescue workers responded to Bayfront Park at about 8 p.m. and took two victims to Ryder Trauma Center, according to Lt. Ignatius Carroll Jr., a Miami fire and rescue spokesman. Carroll said one worker was in critical condition, another serious.

A third worker suffered minor injuries and was transported to another hospital, and a fourth was treated on the scene after being shaken up by what he saw.

An event spokeswoman, Alexandra Greenberg, says that the accident occurred during preparations for the festival.

Carroll said the LED screens were about 30 feet above the stage, and that one section -- several squares connected together -- fell.

"For whatever reason they came crashing down on workers on the stage," he said,

He said the workers were struck by a section that was about 7 feet in height and that extended three-quarters the length of the stage.

Firefighters who were there as a standby unit responded, removing debris and freeing the workers, Carroll said.

"Fire Rescue was on site so there was a rapid response," event spokeswoman Greenberg said in a statement. "Festival organizers are working with, and supporting, authorities as they investigate the details behind the accident.

CBS Station WFOR reports that all work on the main stage was suspended until the morning, when engineers will arrive to assess the stability of the structure. The other stages will also be examined to ensure they are structurally sound.

It is unclear at this time if the music festival -- which has been selling weekend-length tickets for $370 -- will continue as scheduled or be delayed, said WFOR correspondent Lauren Pastrana.

The annual outdoor electronic music festival is set to begin Friday and run over two weekends. Among those scheduled to perform are David Guetta, Swedish House Mafia, Deadmau5, Avicii and Snoop Lion, who was formerly known as Snoop Dogg.