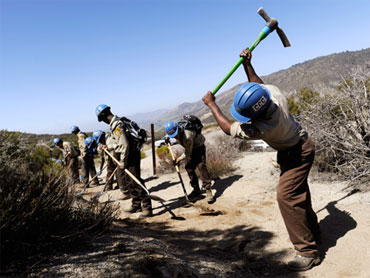 Countless clues left investigators with few answers as they probed what caused the breakup of space shuttle Columbia after the deadly disaster spewed debris across hundreds of miles.

In addition to examining the wreckage, NASA was analyzing transmissions from the crew, records from the shuttle's sensors and data from military, government and commercial satellites.

"We will be poring over that data 24 hours a day for the foreseeable future," NASA shuttle project manager Ron Dittemore told a Houston news conference Saturday, hours after the tragedy.

The space agency put a hold on all shuttle launches until the cause of the accident involving the oldest ship in its fleet could be determined.

NASA has named a Space Shuttle Mishap Interagency Investigation Board to provide an independent review of the disaster, reports CBS News space consultant Bill Harwood. Its first meeting is scheduled for Monday at Barksdale Air Force Base in Louisiana.

Retired U.S. Navy Admiral Harold W. Gehman, Jr., who co- chaired the independent commission that investigated the attack on the U.S.S. Cole in Yemen, and once served as the commander-in-chief of U.S. Joint Forces Command, is panel chairman.

Investigators quickly focused on the possibility that Columbia's thermal tiles were damaged far more seriously than NASA realized by a piece of debris during liftoff.

Just a little over a minute into Columbia's launch on Jan. 16, a chunk of insulating foam peeled away from the external fuel tank and smacked into the left wing, which like the rest of the shuttle is covered with tiles to protect the ship from the extreme heat of re-entry into the atmosphere.

On Saturday, that same wing started exhibiting sensor failures and other problems 23 minutes before Columbia was scheduled to touch down. With just 16 minutes to go before landing, the shuttle disintegrated over Texas.

"As we look at that now in hindsight ... we can't discount that there might be a connection," Dittemore said. "But we have to caution you and ourselves that we can't rush to judgment on it because there are a lot of things in this business that look like the smoking gun but turn out not even to be close."

A day earlier, NASA had given assurances that its analyses showed the launch-day incident was absolutely no reason for concern.

For months, former NASA administrators had voiced concerns about the safety of the shuttle fleet. In April, Richard D. Blomberg, former chairman of the National Aeronautics and Space Administration's aerospace safety advisory panel, warned of danger ahead, saying, "I have never been as concerned for space shuttle safety as I am right now."

Other officials insisted the program was safe, saying the shuttles receive regular upgrades and have a long life span.

Jose Garcia, a retired NASA technical assistant, said budget cuts throughout the 1990s resulted in the elimination of many safety checks during launch preparations. He went public with his concerns, all the way to President Clinton, but said nothing changed.

"The managers always say, `It's safer than it's ever been. Safety first.' All those words come easy," Garcia said.

Investigators have a very challenging problem of trying to collect the parts of the shuttle and go through forensic and metallurgic testing, to try to corroborate what their data tells them.

The debris is very badly fragmented. The pieces are very small, and spread over a couple of hundred square miles.

Retired CBS News aviation correspondent Eric Engberg, an expert on NASA who covered the Challenger tragedy, says all the videotapes taken by amateur photographers along Columbia's flight path "will be gathered up and studied frame by frame. NASA has appealed to everyone with film to get in touch with it. That film is critical."

After Saturday's disaster, President Bush invoked his emergency powers to authorize the Federal Emergency Management Agency to spend whatever federal funds are needed to help with debris recovery and otherwise pay expenses in Texas and Louisiana related to the incident.

Dittemore warned that determining the cause of the crash could be a formidable task. "Some evidence may have burned up during re-entry," he said. "Other evidence is just spread over such a wide territory that we may never find it."

Dittemore said the problem could have been caused by a structural failure of some sort, but did not elaborate. NASA said that until the problems with the wing were noticed, everything appeared to be performing fine.

Law enforcement authorities said there was no indication of terrorism; at an altitude of 39 miles, the shuttle was out of range of any surface-to-air missile, one senior government official said.

If the liftoff damage was to blame, Dittemore said there was nothing that the astronauts could have done in orbit to fix the damaged tiles.

The shuttle has more than 20,000 black, white or gray thermal tiles that are made of a carbon composite or silica-glass fibers and are attached to the shuttle with silicone adhesive.

Loose, damaged or missing tiles can change the aerodynamics of the ship and allow heat to warp or melt the underlying aluminum airframe, causing nearby tiles to peel off in a chain reaction. If the tiles strip off in large numbers or in crucial spots, a spacecraft can overheat, break up and plunge to Earth in a shower of hot metal, much like Russia's Mir space station did in 2001.

In Columbia's case, the shuttle broke apart while being exposed to the maximum re-entry heat of 3,000 degrees on the leading edge of the wings, while traveling at 12,500 mph, or 18 times the speed of sound.

"I would say that the tiles are the No. 1 candidate" for causing the disaster, said Norm Carlson, a retired NASA test chief and former launch controller.

Dittemore said that even if the astronauts had gone out on an emergency spacewalk, there was no way a spacewalker could have safely checked under the wings, which bear the brunt of re-entry heat.

The shuttle was not equipped with its 50-foot robot arm because it was not needed during this research mission, and so the astronauts did not have the option of using the arm's cameras to get a look at the damage.

And even if they did find damage, "there's nothing that we can do about tile damage once we get to orbit," Dittemore said. "We can't minimize the heating to the point that it would somehow not require a tile."

It was the second time in just four months that a piece of fuel-tank foam came off during a shuttle liftoff. In October, Atlantis lost a piece of foam that ended up striking the aft skirt of one of its solid-fuel booster rockets. At the time, the damage was thought to be superficial.

Dittemore said this second occurrence "is certainly a signal to our team that something has changed."