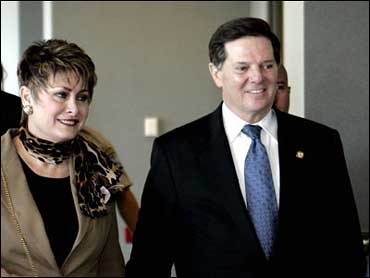 A state district judge said Saturday he will not immediately consider separating two criminal charges against Rep. Tom DeLay to allow an early trial, another blow to the former House majority leader's hopes of regaining his post.

DeLay's attorneys had hoped Priest would separate the charges in an effort to move forward on the money laundering charge while waiting for the appeals court decision.

DeLay, who denies wrongdoing, has been pressing for a quick resolution to his case so he can regain his majority leader job before his colleagues reconvene in late January and call for new leadership elections.

Priest rejected the defense bid on Saturday, saying he would not act until after the 3rd Court of Appeals of Texas rules in the case.

A spokesman for DeLay called the appealed charges "baseless."

"We're confident that the appeals court will render a decision based on the facts and the law that agrees with this sentiment," spokesman Kevin Madden said.

Priest also canceled a Dec. 27 hearing at which he was expected to consider the defense team's allegations of misconduct against prosecutors who brought the charges.

DeLay, 58, and two GOP fundraisers are accused of illegally funneling $190,000 in corporate donations to 2002 candidates for the state Legislature. Under Texas law, corporate money cannot be directly used for political campaigns, only administrative purposes.