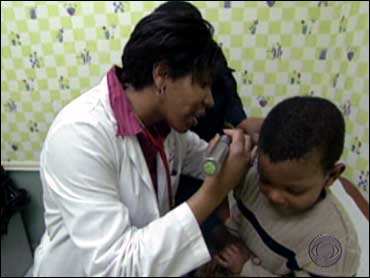 This column was written by David Freddoso.

Late last week, the Bush administration announced plans to curb the practice of states putting already-insured and non-needy children on the rolls of a federal program that subsidizes health insurance for uninsured and needy children.

"This is a political attempt by the administration to try to intimidate states," Rep. Rahm Emanuel (D., Ill.) told the Washington Post.

The Democratic Congress had just passed two versions of a bill to let states expand the State Children's Health Insurance Program (SCHIP) to children in families making three and even four times the federal poverty level ($60,000 to $80,000 for a family of four). With his new rules and his veto threats against their bill, President Bush is spoiling their plans.

But aside from the feigned outrage always involved in politics, why are Democrats so unhappy about dedicating federal money only to those who need it, and not to those who don't? In most parts of the United States, a family of four making $60,000 is doing pretty well and doesn't need a handout or even a "hand up."

The answer is that Democrats in Congress do not just want the government to cover the needy and uninsured. They want to legislate incrementally until they have established universal or near-universal taxpayer-funded coverage, beginning with children.

This is not the paranoid idea of a few conservatives, but a plan outlined in an April 9, 1993, memo from Hillary Clinton's health-care task force. The memo, which became public later only thanks to lawsuits forcing sunshine rules on the task force, was previously mentioned in a Washington Times report ten years ago, when the SCHIP program was first created.

But "Option 3" would have implemented a similar program by population group, beginning with children and expanding from there. The proposed name for the program, Kids First, had deeper meaning than one might suspect: it was the front end of a plan that would later cover everyone.

The memo states that:

Part I Kids First is really a precursor to the new system. It is intended to be freestanding and administratively simple, with States given broad flexibility in its design so that it can be easily folded into existing/future program structures.

Part II of this proposal involves the development of purchasing cooperative (PC) structures and the actual phase-in of all other population groups within the PC system.
The memo also laid out a timeline: By January 1995, all employers were to be mandated to purchase health insurance for their employees' children. By July 1997, all employers would have been required to purchase health plans for the employees themselves.

By January 1998, self-insured adults would have been required to buy policies under the same "purchasing cooperative" structure. The state would then roll into the system children on other government programs besides Kids First, and then perhaps even "early retirees with benefits."

This grand plan never came to pass because HillaryCare failed. But although Kids First is different in many ways from SCHIP (which has no employer mandates, for example), the political strategy is the same. It fits perfectly with Democrats' current legislative attempt to expand the program to wealthier families.

It does not fit at all with the Bush administration's new rules, announced last week. These would, under most circumstances, bar SCHIP for children in families making more than 250 percent of the poverty level (according to 2007 poverty guidelines form the Department of Health and Human Services, that's a family of four earning $51,625 a year).

The administration's new rules seem pretty reasonable — even tame. They would make states insure 95 percent of poor children (below 200 percent of the poverty level) before diverting their federal grants on the middle class (above 250 percent). Critics note that no state has put 95 percent of its uninsured children on SCHIP, but this would suggest that states have failed their mission, not that they should start giving handouts to people who can easily insure their own children.

In order to prevent non-needy families and their employers from dropping private coverage and putting children on the dole, the administration will also require non-needy children to be uninsured for a year before they are eligible for SCHIP.

If the income threshold for SCHIP already sounds high for a family of four, it is more so for larger families. My father provided a pretty good life to our family of seven on his comfortable but modest university professor's salary. He says he never even thought of going on welfare — but maybe he should have. Even Bush's new "draconian" SCHIP rules would have allowed all five of us kids to go on government health insurance, as long as Dad was making $77,725 or less. The Democrats' plan would have covered us all on a $93,000 salary, or even (had we lived in New York State) $124,000! (I have trouble imagining my own mother as a six-figure welfare queen.)

The Democrats' SCHIP outrage, while perhaps politically savvy (who could oppose insuring children?), has nothing to do with the real problem of those poor and uninsured. There are several ways the government could make insurance affordable — President Bush has proposed a generous health-insurance tax deduction, and others have proposed a repeal or circumvention of burdensome state0insurance mandates that massively inflate prices.

But the Democrats' expansion of SCHIP into the middle class is not a solution to any existing problem. It is welfare for those already faring well, and with an eye toward expanding government in the future.
By David Freddoso
Reprinted with permission from National Review Online