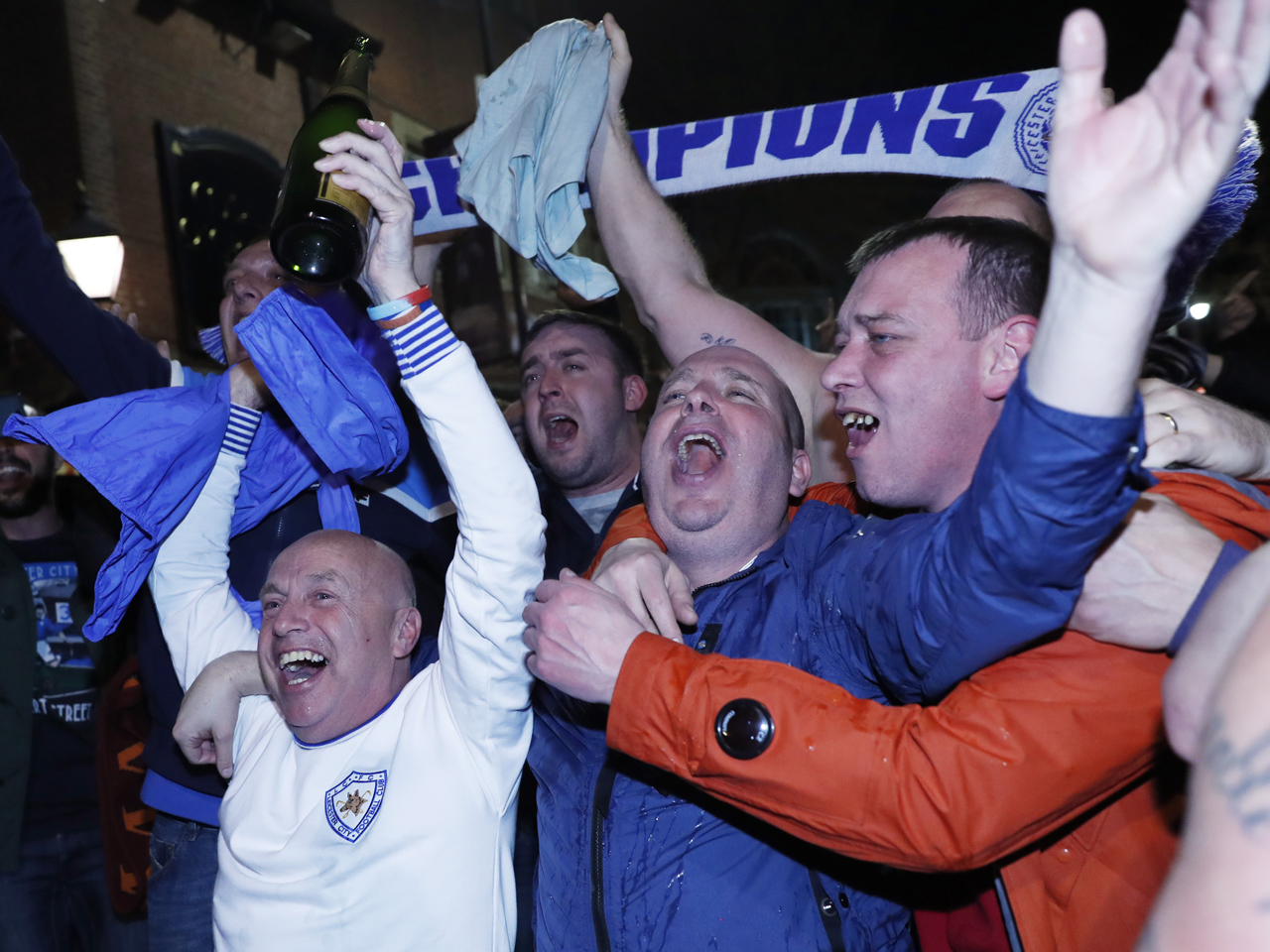 Leicester City missed an opportunity to clinch its improbable Premier League title on the field Sunday, but it made no difference. As Monday ended, they wore the crown of champions.

Tottenham, which entered Monday's game against defending champions Chelsea as the only team with a mathematical chance of catching the Foxes over the final two matches of the season, needed a win to keep their hopes alive. A 2-2 draw, which saw Tottenham squander a two-goal lead in the second half at Stamford Bridge, extinguished that faint glimmer of hope.

For Leicester, it capped a nearly impossible achievement, one that ranks among the biggest underdog stories in sports. The modest team from central England narrowly escaped relegation last season and entered bankruptcy protection only seven years ago while in the third tier. Entering this season, British bookmakers set them as a 5,000-to-1 longshot to win the league, which for decades has been dominated by a small number of elite clubs - Manchester United, Manchester City, Chelsea and Arsenal. In fact, since the Premier League's establishment in 1992 as the top tier in English football, only two teams outside that exclusive quartet have seized the league crown - Blackburn in 1995 and now Leicester in 2016.

They had the chance to clinch victory Sunday against Manchester United at Old Trafford, the Manchester club's home ground, but drew the game 1-1. Still, the sense of inevitability was in the air as their flag-waving contingent of traveling fans chanted, "We're going to win the league" over and over after the final whistle.

So, how did such a humdrum team overcome the mega-rich giants of the Premier League?

Here are a few reasons:

The seeds of Leicester's charge to the title were sown at the end of last season, when the team pulled off the greatest escape from relegation ever seen in the Premier League.

Seven wins in their last nine games lifted the Foxes from last place to safety, demonstrating the togetherness and ability in the squad. The team spirit was in place - now it just needed a few changes in personnel and, as it would transpire, a change in manager.

Leicester's recruitment in the 2015-16 offseason proved inspired. The hiring of Claudio Ranieri as a replacement for popular manager Nigel Pearson was heavily criticized at the time - mainly because of Ranieri's woeful recent reign as Greece coach - but gave the club arguably the most high-profile coach in its 132-year history. Ranieri was known as "The Tinkerman" from his time at Chelsea, but was happy to build on the base created by Pearson. Guided by the club's scouting network, Ranieri oversaw the signings of defenders Robert Huth and Christian Fuchs, midfielder N'Golo Kante and Japanese striker Shinji Okazaki. That quartet has been a mainstay in the team and crucial to its title triumph.

Ranieri's tactics have been a throwback: a basic 4-4-2 formation, defenders who defend, central midfielders who run and run, wingers who stay out wide, and attackers with an eye for goal. Leicester has mastered the art of the counterattack and winning despite a lack of possession. Opponents only started treating Leicester seriously when it was too late - and still couldn't find a way to beat them.

Every title-winning team needs a sprinkle of stardust up front and that has been provided by top scorer Jamie Vardy and star winger Riyad Mahrez. Vardy, who was playing non-league football four seasons ago, became the first player to score in 11 straight Premier League games and has scored 22 league goals this season. Mahrez has achieved a breakthrough season, with the Algeria winger scoring 17 goals - four of them winners - and being named Player of the Year by his peers. They are now among the most sought-after players in world football.

Leicester's defensive structure - a mixture of top-team rejects (Danny Simpson, Robert Huth, Danny Drinkwater), formerly lower-league journeymen (Wes Morgan and Kasper Schmeichel) and an unheralded foreigners (Christian Fuchs, Jeffrey Schlupp, N'Golo Kante) - has come into its own in the second half of the season, helping the team keep 15 clean sheets in title.

Leicester will look back on some telling moments of the season: Robert Huth's late winner to beat Tottenham 1-0 away in January; catching Manchester City cold with a 3-1 win at Etihad Stadium to go five points clear in early February; four straight 1-0 wins across March/early April that showed the team had the resolve of champions; and a battling 2-0 win at Sunderland last month, which finally made any lingering skeptics realize that Leicester is the real deal.

Completing the perfect storm, Leicester has been able to focus solely on the Premier League because of no European football and getting eliminated from both domestic cup competitions early (League Cup in the third round and FA Cup in the fourth round). It gave Ranieri at least a week to prepare for each game and his players time to recover from games. Liverpool was faced with the same scenario two years ago, but couldn't go on to clinch the title. Leicester has managed to seal the deal.