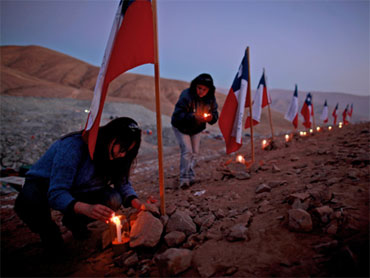 Put on a show. Play cards. Sing. Get exercise. And whatever you do, don't get too fat to squeeze through the escape tunnel.

Chilean officials are offering lots of advice to help 33 miners trapped underground keep their health and sanity as they wait to be rescued. One thing they're not sharing with the men is their estimate that it could take four months to drill them out of an emergency shelter nearly half a mile below the surface.

"I hope that nobody commits the imprudence of telling them something like this. We have asked the families to be careful in the letters they write," Interior Minister Rodrigo Hinzpeter said Wednesday. "It's going to be very hard. We're going to have to give them a great deal of attention, care and psychological support."

The miners were trapped by an Aug. 5 collapse, and rescuers established contact with them Sunday by drilling a 6-inch-wide hole to the shelter. That hole and two others are now lifelines, delivering supplies, communications and fresh air to the miners while they wait for the escape tunnel to be drilled.

The miners have a general idea that their rescue will take time but haven't been given the details, Hinzpeter said.

Some mining experts believe it will take far less than four months to dig the tunnel.

Larry Grayson, a professor of mining engineering at Penn State University, said it could take just 25 to 30 days to reach the miners. Gustavo Lagos, a professor at the Catholic University of Chile's Center for Mining, estimated the job could be done in two months if all goes well and four months if it all bogs down.

Lilianett Gomez, whose father, Mario, is trapped in the mine, said she thinks the miners know their rescue won't be quick. "They know how long it will take for them to be rescued. As miners they know the work very well," she said.

The rescue team isn't ready to let families talk directly with the miners yet, but Chilean President Sebastian Pinera asked their leader, Luis Urzua, in a call Tuesday what they needed.

"That you rescue us as quickly as possible, and that you don't abandon us," the shift foreman responded. "Don't leave us alone. ... We hope that all of Chile shows its strength to help us get out of this hell.

"It was frightening. We felt like the mountain was coming down on us, without knowing what happened. Thanks to God, we still hadn't gathered together to go out to have lunch. ... At 20 minutes before 2 (their usual lunch hour), the mountain came down on top of us."

"For about four or five hours, we couldn't see a thing. After that we saw that we were trapped by an enormous rock that filled the entire passage of the tunnel."

The miners made a two-day emergency food supply last more than two weeks as they waited for contact from the outside world, and also conserved power from their headlamps before rescuers sent them LED lights.

They remain days away from being able to eat solid food because they went hungry for so long. Rescuers have sent down a high-energy glucose gel, and on Wednesday they gave the miners cans of a milk-like drink enriched with calories and protein.

It takes 30 minutes for water, medicine and food placed into long, metal canisters called doves to reach the men below from the surface, reports CBS News correspondent Seth Doane. They're threaded through one of three small shafts and lowered half a mile straight down. The miners are now receiving some solid food, each getting about 1,000 calories per day, and they're able to leave their small refuge chamber below the collapsed part the mine. There's about 330 feet, roughly the size two of olympic swimming pools, in which it's relatively safe to move around.

Even though the miners have undoubtedly lost a significant amount of weight, Chilean officials are trying to ensure they don't bulk up before their rescue. They say the miners will have to be no more than 35 inches (90 centimeters) around the waist to make it out of the tunnel.

The escape tunnel will be about 26 inches wide - the diameter of a typical bike tire - and stretch for more than 2,200 feet through solid rock. That's more than 80 inches in circumference, but rescuers also have to account for the space of the basket that will be used to pull the miners to safety.

Most Americans couldn't meet the 35-inch limit. The average U.S. waistline is 39.7 inches for men and 37 inches for women, according to the Centers for Disease Control and Prevention.

Chile's health minister, Dr. Jaime Manalich, said officials are planning exercise and other activities to keep the miners healthy and trim, using some of the passages that remain accessible to the miners.

"We hope to define a secure area where they can establish various places - one for resting and sleeping, one for diversion, one for food, another for work," Manalich said.

Establishing a daily and nightly routine is important, the minister said, adding that having fun also will be critical. The rescue team is creating an entertainment program "that includes singing, games of movement, playing cards. We want them to record songs, to make videos, to create works of theater for the family."

The miners are reportedly showing incredible discipline, even following the command structure of the their regular work shifts, reports Doane.

The Chilean government has asked NASA for advice on "life sciences" issues and technology that can help the miners, and the space agency will do what it can, said NASA spokesman Mike Curie.

The gold and copper mine runs like a corkscrew for more than 4 miles under a barren mountain in northern Chile's Atacama Desert.

Outside, Chilean flags are everywhere - including the torn one that became a symbol of Chile's resistance when a young man was photographed holding it just after a massive earthquake rocked the South American nation last year. That flag was raised above 33 others that sit on a hill over the mine, each representing one of the trapped men.

The mood is optimistic among family members, many of whom are camped at the mine site.

"All the guys with him have an experience of surviving. Their work is survival," Urzua's cousin, Jorge Barahona, said Wednesday as he warmed his hands at a campfire.

Some family members filed suit Wednesday against the mine's owner, Compania Minera San Esteban. Attorney Remberto Valdes, representing the miner Raul Bustos, accused the company of fraud and serious injury based on the lack of safety measures like the escape tunnel that the state-owned Codelco copper company is now preparing to dig. Four municipal governments in the area are preparing a similar claim. The company that owns the mine could now go bankrupt, reports Doane.

On Aug. 31, the men will have been trapped underground longer than any other miners in history. Last year, three miners survived 25 days trapped in a flooded mine in southern China. Few other rescues have taken more than two weeks.