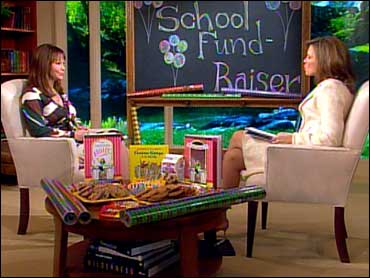 Now that kids are back at school, parents have to deal with a barrage of fundraising letters and phone calls. Many parents complain that say it's too much, but don't know what can be done about it.

On The Early Show Monday, parenting expert and author Vicki Iovine called the fundraising "staggering. Before the teachers even know your kids' names, you're supposed to be out selling things on behalf of the school, and it's daunting. I mean, I'm still not recovered from back-to-school shopping!"

But, Iovine told co-anchor Hannah Storm, there are less objectionable ways for schools to go about it.

"First of all," Iovine said, "psychologically, we like going after a specific goal. Right now, many parents feel that the money is just a machine, that they just will make as much money off of us as they can until it's June and we're out of school and we get a break until next September. Schools need to focus more on giving us updates, how close we are to goals, and what our goals are.

Sometimes, the goals are a little crazy. I had the experience recently of getting up at 6:00 a.m. to drop my son off for an away football game and, in the car he actually said to me, 'I hope we're not taking school buses.' And I said, 'Did you think they had individual cars for you?' And he said, 'No, but I want one of those other buses, the kind that have bathrooms on board!' "

And that, she agreed with Storm, is the kind of thing schools sometimes raise money for.

Rather than the typical sales of candy, wrapping paper, or cookie dough, schools be more creative and relevant in the way they raise money, Iovine insists.

"My big appeal is they give us time to be with our kids instead of teaching our kids to be junior Fuller Brush men or junior Avon ladies," she said, "because, in the end, what parents really sets their kid loose in the city and says, 'Just go sell to all the neighbors, Darling.' "

More often, parents get directly involved in the selling.

You have, Iovine observes, "moms standing in front of grocery stores saying, 'Honey, go ask that man,' but we (parents) are all doing the work.

"I say, for working parents, we need more time with our children. So, instead of having us go sell, let's make money on events that include the entire family. I don't necessarily want to go to a gala affair with other parents on a school night when I can be home with my child. So, let's have a family picnic or a fifth grade slumber party and a movie, something like that. Charge admission. Enjoy the time. You get value, true family value for your money."

Just asking parents for money directly doesn't tend to work as well, Iovine pointed out, since people frequently don't live up to the commitments they make: "If you are asked to give $50 or $200 or whatever you can give, people take that as one more bill and throw it on top of the in-box and, sometimes, it has the least priority. So people want value for their dollars.

"We all love our children, we will do anything, in fact, probably too much. But, I think if you can allow parents who are so strapped for time and only want to have dinner with our families, if schools cooperate and combine those things," fund-raising will be less taxing and, perhaps, more successful."