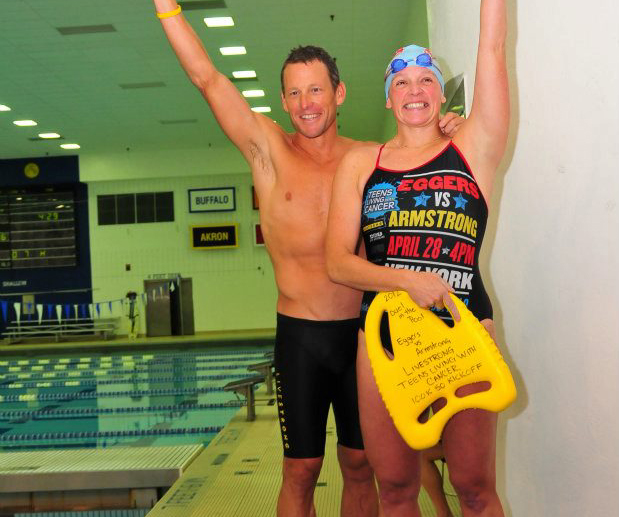 (MoneyWatch) COMMENTARY A friend of mine just raised the bar on chutzpah: Mary, a suburban mom, challenged champion cyclist Lance Armstrong (no introduction needed) to a race for charity. And he accepted. And she won. And in doing so, Mary not only accomplished (in fact, vastly exceeded) an important goal, but -- unintentionally -- taught a valuable business lesson about the power of tenacity, and how big rewards don't always require big risks; in fact, sometimes they come from simply realizing you have little or nothing to lose.

OK, I'm not just talking about any ordinary suburban mom. Mary Eggers is what can only be described as a chronic overachiever: elite multi-sport athlete, coach to other elite athletes, nurse, yoga instructor, motivational speaker, fundraiser, and devoted mother. And all of that after a lifetime of challenges that make her accomplishments all the more impressive.

In short, she's extraordinary. But extraordinary enough to challenge Lance Armstrong? The seven-time winner of the Tour de France, the world's most famous, and notoriously tough, bike race? The person many consider to be the greatest athlete in the world? Yup, because none of that mattered to Mary -- she was on a mission.

Mary's mission was to raise money for a teen cancer charity that's close to her heart. Like most grassroots efforts, the original goal was modest -- maybe raise a grand or two, which would have been great. But somewhere along the line, this hyper-competitive suburban mom thought it would be fun to tweet -- and perhaps tweak -- Armstrong (they did not know each other and had never been connected; this was a pure "cold tweet") with a quirky challenge: race her one-on-one. not on two wheels, but rather swimming two lengths of a pool... using only their legs and kickboards. Riiiiight. Don't sit by the phone, Mary.

Except that Armstrong tweeted back. His response: "You're on." Fast forward a few weeks and we see Eggers beating Armstrong by a noseplug, in what came to be called the "Duel in the Pool." Meanwhile, her once-modest fundraising tally is now approaching six figures and growing, and the event has spawned a veritable cottage industry of charitable fitness challenges.

Mary's "what the heck" shot in the dark has taken on a life of its own.

There is much more to this great story, and I encourage you to click the links or Google and read about it. But this is a business column, and sooner or later it needs to come around to the business angle. So here's the simple lesson: If you don't try, you'll never know, and the less you have to lose, the more you should try.

In my company, from time to time we have "what the heck" moments like Mary's (though nowhere near as exciting). For example, outside or our normal PR work, we'll sometimes send our products to high-profile media people or celebs, knowing full well that 99 percent of them will never reach their intended recipients, much less elicit a response. But it only takes one to make the whole investment of a few samples well worthwhile. And we've seen it happen -- we've gotten our stuff on major TV network shows, count some big-time celebrities among our customers (you can imagine the value of people seeing what they carry), and have made some extraordinarily valuable connections, simply by not writing our wacky ideas off as impossible or pointless. It's been worth every minute and penny we've put into it.

Another friend of mine took his long-shot by flying from Canada to New York to stand outside a morning show studio holding up his product, like a star-struck tourist. This guy is normally a very serious entrepreneur, but figured he'd invest a day and a plane ticket and have some fun. Result? He caught the hosts' eye, wound up getting his product featured on the show, and came home to a pile of orders. He has very successfully repeated the clever tactic a dozen times since then.

Others have landed big deals, great jobs, funding, and more, simply by taking a chance on something with little to lose and much to gain.

I'm certainly not suggesting building a business strategy around lottery-ticket thinking or crossed-finger publicity stunts. Obviously your business runs on information, planning, calculated risks, and execution. But at the same time -- especially if your business is small and needs to overcome limited resources with resourcefulness -- don't dismiss the idea of taking an occasional flyer. If it's not a big time and money commitment, and doesn't bet the farm, sometimes a crazy idea -- backed up with a little audacity and willpower -- can change everything.