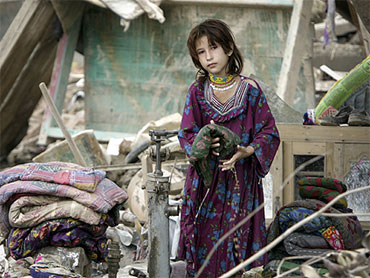 Most of the 400,000 people who live in the area are thought to have evacuated already, but those remaining were warned to flee, he said.

The floods that began almost a month ago with the onset of the monsoon and have ravaged a massive swath of Pakistan, from the mountainous north through to its agricultural heartland. More than 8 million people are in need of emergency assistance, and the U.S. and other nations have pledged hundreds of millions of dollars in aid.

The death toll in the floods stands around 1,500 people, but the disaster ranks as one of Pakistan's worst ever because of the scale and massive economic damage, especially to the country's vital agricultural sector. The U.N. said earlier this week that some 800,000 people are still cut off by the floods and accessible only by air.

As floodwaters receded in the north, they continued to wreak havoc in the south as bloated rivers coursed through.

"We hope these tides would fully subside after 48 hours," he said.

The Pakistan government says about $800 million in emergency aid from the international community has been committed or pledged so far. But there are concerns about how the money will be spent by the government, which has a reputation for inefficiency and corruption.

Meanwhile, the Taliban have hinted they may launch attacks against foreign flood relief workers in Pakistan, saying their presence is "unacceptable."

Pakistani Taliban spokesman Azam Tariq claimed Thursday that the United States and other countries were not really focused on providing aid to flood victims but had other "intentions" he did not specify.

Tariq strongly hinted that the militants could resort to violence.

He said: "When we say something is unacceptable to us one can draw his own conclusion."

Tariq spoke with The Associated Press by telephone from an undisclosed location.