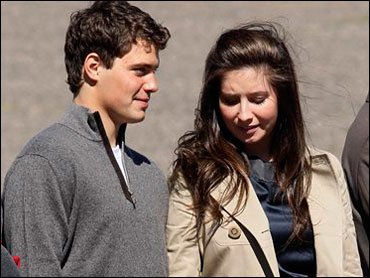 Levi Johnston, the father of Sarah Palin's grandchild, said the former Republican vice presidential candidate wanted to adopt his child so that people wouldn't know her 17-year-old daughter was pregnant.

In an interview with Vanity Fair, Johnston said Palin had a plan to deal with Bristol's pregnancy.

"Sarah kept mentioning this plan. She was nagging - she wouldn't give it up. She would say, 'So, are you gonna let me adopt him?' We both kept telling her we were definitely not going to let her adopt the baby. I think Sarah wanted to make Bristol look good, and she didn't want people to know that her 17-year-old daughter was going to have a kid," Johnston told the magazine for its October edition, which goes on sale Saturday. Excerpts of the interview were posted Wednesday on the magazine's Web site.

Meghan Stapleton, Palin's spokeswoman, did not immediately respond to request for comment, but has previously discounted Johnston's allegations. Palin has been keeping a low profile since she resigned on July 26 with more than a year left in her first term.

A week after Republican presidential candidate John McCain named Palin as his running mate, the campaign issued a statement that her unwed daughter was pregnant. It also said Bristol, now 18, and the young man would marry.

Johnston, 19, lived in the house for two months awaiting the birth of the baby, Tripp, who was born in December. The couple called off the wedding shortly after their son's birth.

Since then, Johnston has complained in national interviews that the Palins limited his access to the boy. He's also said he's pursuing a career as an actor or model.

Johnston said the Palin home in Wasilla was not what most people would think.

"The Palin house was much different from what many people expect of a normal family, even before she was nominated for vice president. There wasn't much parenting in that house. Sarah doesn't cook, Todd doesn't cook - the kids would do it all themselves," Johnson told Vanity Fair.

Palin has four other children. The youngest, Trig, is 1 year old.

Johnston also repeated claims that Palin said she wanted to quit and write a book or host a TV show.

When Palin returned to Alaska following McCain's unsuccessful run for president, she was different, Johnston said.

"Sarah was sad for a while. She walked around the house pouting. I had assumed she was going to go back to her job as governor, but a week or two after she got back she started talking about how nice it would be to quit and write a book or do a show and make 'triple the money.'

"She would blatantly say, "I want to just take this money and quit being governor," Johnston said.

He also claims Palin is not the hockey mom or outdoorswoman she claims to be. He said she rarely attended her oldest son's hockey games, and asked Levi how to shoot a gun.

"She says she goes hunting and lives off animal meat - I've never seen it," Johnston said.

Chuck Heath, Palin's father, said his daughter has been out of Alaska for the past month writing her memoirs.

Later this month, the former governor is expected to appear at her first commercial speaking engagement during a visit to Hong Kong to address the CLSA Investors Forum, a well-known annual conference of global investment managers. Bill Clinton, Al Gore and Alan Greenspan have spoken at the event, hosted by brokerage and investment group CLSA Asia-Pacific Markets.