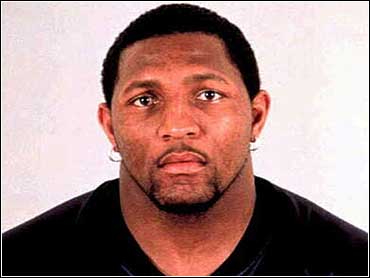 Shocked by the $250,000 fine the NFL levied against him for obstructing justice in a murder case, Baltimore linebacker Ray Lewis said he plans to fight it.

Lewis said Friday he plans to appeal the fine, but declined to discuss it after the Ravens' 24-13 victory over the Carolina Panthers.

The All-Pro linebacker was originally charged with murder in the death of two men outside an Atlanta nightclub following a post-Super Bowl party in January. He ended his trial early by pleading guilty to the misdemeanor charge of obstruction of justice.

On Thursday, NFL commissioner Paul Tagliabue handed down his punishment by levying what is believed to be the highest fine against a player for an infraction not involving substance abuse.

Lewis' agent, Roosevelt Barnes, refused comment Friday but told CBSSportsline.com that the fine set an awkward precedent for the NFL.

"I mean $250,000? For what? It was a misdemeanor, that's all Ray pleaded guilty to, remember? That's like pleading guilty to a traffic ticket," Barnes said.

"If they're going to fine Ray, then the league is going to have to check the traffic records all over the league and fine everyone who ever ran a red light. Now wouldn't that be an awkward thing to have to do?"

But Tagliabue said in his ruling that the fine was based on the perception Lewis' case created because by not telling police the full story, Lewis "fueled a public perception that he had something to hide."

"In doing so," Tagliabue added, "he put his own livelihood and reputation needlessly at risk and he caused great harm to other NFL players and to the league."

Tagliabue also ruled that Lewis will be fined another $250,000 and be subject to suspension if he violates any of the terms of his 12-month probation.

Lewis' case was just one in a string of embarrassing incidents for the NFL over the past year.

Former Panthers receiver Rae Carruth, the first active NFL player to be charged with murder, sits in a jail cell a mile away from Ericsson Stadium awaiting his trial.

And former Panthers running back Fred Lane was shot and killed by his wife in July in what police called a domestic dispute. No charges have been filed.

Carruth, cut by the Panthers last November when police charged him with masterminding the shooting death of his pregnant girlfriend, could go to trial as early as October.

Pnthers owner Jerry Richardson, in a rare interview earlier this week, said he dreads the trial and the distraction it will create.

But Richardson said he didn't think the Panthers or the NFL should be held accountable for Carruth's actions.

"I don't know what we could have done," Richardson said. "We have won the player support program award for the NFL for two years in a row. We have a full-time chaplain. I don't know how I could do any more of it than I do."