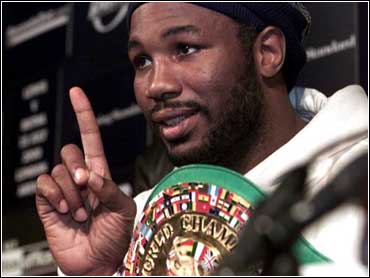 An agreement was reached Tuesday for Lennox Lewis to defend the WBC-IBF heavyweight titles against David Tua on Nov. 11 in either Toronto or Las Vegas.

Tua is guaranteed $3.5 million plus a percentage of pay-per-view profits for the Nov. 11 fight.

The fight will be an IBF mandatory title defense for Lewis, who said he could make more than $10 million from the fight on TVKO.

The agreement prevented the fight going to purse bids.

"In order to keep my options open, as to fighting Tua in Toronto or Las Vegas on Nov. 11, my team had to retain control of the promotion and yet avoid the risk of going to an IBF purse bid, timed for noon today (Tuesday)." Lewis said in a statement released in London. Negotiations were conducted in New York.