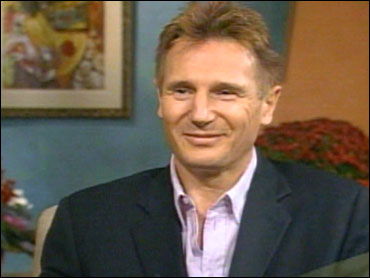 In the new movie "Love Actually," Liam Neeson plays a man mourning the loss of his wife while dealing with a distant stepson, who is a little boy played by Thomas Sangster.

He eventually finds out the distance isn't caused by sadness, but by a much different emotion: love.

Known for his dramatic work, Neeson tells The Early Show co-anchor Harry Smith he wanted to do the romantic comedy after he read the script.

The story is written by Richard Curtis who is known for his work in "The Black Adder," "Four Weddings And A Funeral," "Bridget Jones's Diary," "Notting Hill," the "Mr. Bean" series and more. "Love Actually" is his directorial debut.

Neeson says, "I've always admired his writing. This film was his directorial debut and I knew he knew what to do, and it is a genre I have not tapped into before."

And Neeson points out, Curtis just believes in love. "He's incredibly cynical and as smart as a button, very wry intelligence, but yet, when it comes down to it, he and this lady, he genuinely sees love all around and feels we're not reminded of it enough."

"He upped the ante quite a bit, actually, because he's one of those rare actors who when he speaks the lines, he believes he thought them up himself," Neeson says about the young Thomas. "And he takes no prisoners. You have to be truthful back to him. He looks right into your soul."

Last year, Neeson was seen on Broadway performing "The Crucible." What lured him to the stage?

"Well, I'm going to try it once every two years," Neeson says, "My early years were in Ireland where all theater based, so I miss it."

Some Facts About Liam Neeson