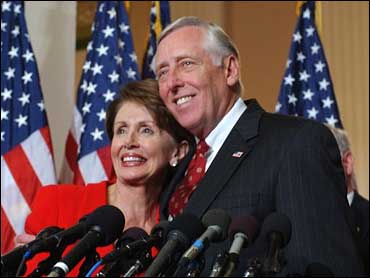 (AP Photo)
President Obama on Wednesday night told Congress it is time to stop bickering over health care reform, but it is unclear whether his words can tone down the infighting within his own party.

After one of the leaders of the Blue Dogs -- a group of moderate House Democrats -- called for a more unified party message on Wednesday morning, at least one House progressive said she would not back off of her criticisms of the Blue Dogs, according to a report from the Hill newspaper.

Rep. Maxine Waters (D-Calif.), a member of both the Congressional Progressive Caucus and the Congressional Black Caucus, is one of the 60-plus House Democrats who have said she will not vote for a health care bill that does not include a government-run health care plan, or "public option." This stance has put Waters and other liberals at odds with the Blue Dogs and other moderates. For instance, liberal Rep. Pete Stark (D-Calif.) called Blue Dogs "brain dead."

Waters reportedly said she would not tone down her rhetoric.

"Hell, no," Waters said, according to the Hill. "Progressives have a voice in this caucus, and we're not going to back down."

Furthermore, the newspaper reports, the NAACP is organizing a campaign to pressure Blue Dogs from certain districts to support health care reform. Other groups are also targeting some moderates for tepid support of the president's more liberal proposals, like the public option. For instance, the Progressive Change Campaign Committee has gone after moderate Democratic Sen. Ben Nelson of Nebraska.

The tension is apparent in House leadership as well, with House Speaker Nancy Pelosi insisting a health care bill must include a public option while House Majority Leader Steny Hoyer says that it is not necessary.

GOP Response: "It's Time to Start Over"

Mark Knoller: Obama Willing to Compromise — Up to a Point

Was Obama Clear on the Public Option?

Analysis: The Road Ahead for Health Care