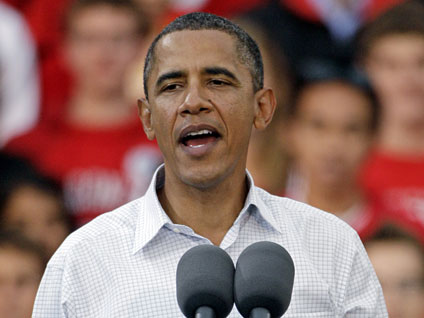 Democratic insiders and financial backers are becoming increasingly vocal about their lack of faith in the Obama White House's ability to help the Democratic Party regain the support of voters.

Now, according to reports, they are making plans to rely less on President Obama's popularity in 2012 and take matters into their own hands. Talks are reportedly underway about creating third-party groups to mobilize the Democratic base and raise cash, much Republican backers did ahead of the 2010 elections.

Longtime Democratic organizer Steve Rosenthal is hosting a meeting Monday with about a dozen prominent Democrats, like former Clinton White House adviser Harold Ickes and labor leader Andy Stern, the Los Angeles Times reports, to discuss bringing outside Democratic groups together to form a new operation to fight back against conservatives in 2012.

In an e-mail invitation for the meeting obtained by the Times, Rosenthal poses questions for the attendees, such as whether Democrats should create a group modeled after the Karl Rove-affiliated American Crossroads, which ran a successful campaign operation this year. The invitation also asks whether the operation would include an entity through which donors could make anonymous gifts (American Crossroads discloses its donors, but the affiliated Crossroads GPS does not), or whether they should also set up a media arm (like Crossroads Media).

Monday's meeting comes on the heels of a conference this week in Washington held by the Democracy Alliance, a group of wealthy liberals. The participants in the conference repeatedly called on the White House to more aggressively advocate for a liberal agenda, according to reports, and to fight back against Republicans.

The Huffington Post reports that billionaire George Soros said at the meeting that progressives "need to draw a line" after losing in the midterms. "And if this president can't do what we need, it is time to start looking somewhere else."

An adviser for Soros told the Huffington Post that Soros did not mean to imply there should be a primary challenge against Mr. Obama, but that progressives must promote their agenda more forcefully on their own. Others at the Democracy Alliance gathering echoed that sentiment.

"There's a strong feeling among progressives, almost to a person, that we have to fight more," said Steve Phillips, a San Francisco activist who runs the political advocacy group PowerPAC.org, told the L.A. Times. "Nobody is demoralized; they're angry."

The Democrats' wealthy, ideological donors want to see more action on issues like "don't ask, don't tell," and ending the Bush tax cuts for the wealthy, the Times reports.

Those issues have also proven to be salient among donors at the grassroots level. Groups like the Progressive Change Campaign Committee have rallied Democratic supporters around these issues in recent weeks, sometimes taking a defiant tone against the president.

PCCC co-founder Adam Green e-mailed the group's supporters this week about Mr. Obama's apparent willingness to compromise on the issue of the Bush tax cuts. Green urged liberals to sign a petition reading, "President Obama, ARE YOU KIDDING? Democrats lost in 2010 because they caved instead of fighting on popular progressive issues. Americans strongly oppose more tax cuts for millionaires and nearly a trillion in new debt. If you don't fight on this issue, Democrats may lose even more seats in 2012 - and possibly even the White House."

Democrats in Congress are making efforts to appease their liberal base in the next two months on both "don't ask, don't tell" and the Bush tax cuts.

Democrats risk losing to Republicans in Congress on both fronts, however, and some are looking for help from the president. In a recently released report from the Center for American Progress, the liberal group's president John Podesta urges Mr. Obama to use all of the tools at the president's disposal to enact change -- to do more than wait for Congress to act.

"Congressional gridlock does not mean the federal government stands still," he wrote. "This administration has a similar opportunity to use available executive authorities while also working with Congress where

Additionally, Democrats in Congress believe the president could do a better job selling the party's agenda to voters, Politico reports. Citing unnamed sources, Politico reports that Sen. Bill Nelson of Florida complained to his Democratic colleagues in a private meeting that Mr. Obama has created a toxic political environment for Democrats.

Two top Democratic consultants made similar remarks in a public setting yesterday. At an event organized by the Christian Science Monitor, Democratic strategists James Carville and Stan Greenberg said the Democrats' losses in 2010 could have been less significant had the president delivered a better message to voters, Huffington Post reports. They blamed Mr. Obama of a "total mis-framing" of his economic message.

Carville added, "If Hillary gave up one of her balls and gave it to Obama, he'd have two." He later said on CNN that the comment was meant as a joke, but he does not apologize for the comment and is not sorry if it offended anyone.