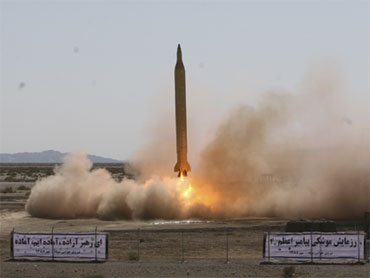 (AP Photo/Ali Shaigan, Fars)
It doesn't approach the venomous level of the Who Lost China debate in the early 1950s. But give it some time.

After noisy battles over federal bailouts, Supreme Court appointments and health care reform, Iran has emerged as the latest Rorschach test for an already politicized chattering class to stake out talking points. For Michael Steele and the Republican National Committee, Iran's holocaust-denying president Mahmoud Ahmadinejad no doubt offers a cartoon villain nonpareil to feature against the Democrats in the upcoming mid-term congressional election commercials. But file that one under coming attractions for 2010. If you're looking for more immediate entertainment, how about an intra-Democratic donnybrook, the likes of which may rival the run-up to the U.S. invasion of Iraq in 2003?

After Iran formally acknowledged last week the existence of a previously undeclared nuclear enrichment facility, the hawks had a collective fit. Senators Joe Lieberman (D-Ct.) and Evan Bayh (D-Ind.) (along with Republican Jon Kyl of Arizona)got themselves a headline by firing off a joint call for the United States to "do whatever it takes to stop Iran's nuclear breakout." But support for taking a hard line approach included House Speaker Nancy Pelosi as well as Rep. Foreign Affairs Committee chairman, Howard Berman, both liberal Democrats.

Richard Cohn of the Washington Post, gave voice to all of this liberal hawkishness when he suggested in a Tuesday column with the title "Time to Act Like a President" that the U.S. might need to obliterate Iran's underground nuclear enrichment facilities before it's too late.

"These Persians lie like a rug," he wrote. (Yes, he actually wrote that line.) "No one should believe Mahmoud Ahmadinejad. Iran seems intent on developing a nuclear weapons program and the missiles capable of delivering them. This -- not the public revelations of a known installation -- is the real crisis, possibly one that can only end in war."

When one of the Washington Post's (mostly) house liberals starts sounding like a foreign policy hawk) from the National Review, something's up with the Democrats. And so it is: The rift over foreign policy between liberals and the left which opened during the Iraq debate in 2002 was out of view during Barack Obama's run for president against John McCain. But (temporarily) forgive and forget didn't mean that old suspicions didn't linger. They were back on display after Secretary of State Clinton's warning last week that crippling sanctions might be necessary if Tehran keeps stonewalling.

That had a familiar ring to administration critics who can cite by heart what then-Senator Hillary Clinton had to say had to say on the Senate floor in 2002 as she voted to authorize the use of force against Saddam. In the Nation, Robert Dreyfuss concluded that the Obama administration simply is tone deaf and doesn't understand that the U.S. can't get its way by threatening Iran. "Negotiations succeed when both parties, not just one, can claim victory. To succeed, the United States is going to have to put on the table an offer to accept Iran's nuclear enrichment program, without calling for a "freeze" or the dismantling of the whole thing. In exchange, Iran is going to have to accept strict and intrusive international oversight and inspections of its facilities, to ensure that it doesn't have a military dimension. That's the deal that will work. Anything less just ain't happening."

(For another take, check out this on air faceoff between Salon's Glenn Greenwald on the one hand and Arianna Huffington and the Post's Editorial Page writer Jonathan Capehart.)

Writing in Counterpunch, Paul Craig Roberts, who has traversed a lot of ideological ground since his days as an Assistant Secretary of the Treasury during the Reagan administration, raised the old complaint about double standards. The gist of his argument: Why are we saying Iran can't be trusted with nuclear energy, while we're fine letting Israel, India and Pakistan --which refuse to sign the nuclear proliferation treaty and have not submitted to IAEA inspections - develop their nuclear programs. "Indeed, at this very moment the Israeli government is screaming and yelling "anti-semite" to the suggestion that Israel submit to IAEA inspections. Iran has submitted to the IAEA inspections for years."

You know where this is heading.