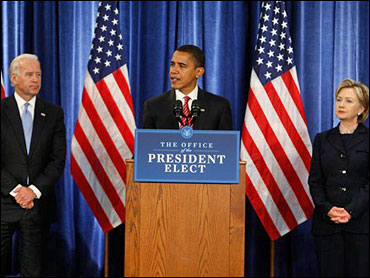 Barack Obama promises to steer the nation straight again. He better be ready for a strong force pulling left.

The president-elect drew plenty of support from moderates, but the liberal side of the Democratic Party followed him most resoundingly: labor unions, influential Internet blogs and legions of grassroots volunteers. He won almost 90 percent of the liberal vote, more than the previous two Democratic presidential nominees, John Kerry or Al Gore.

"We'll see," said Eli Pariser, executive director of the liberal powerhouse Moveon.org, about what Obama will deliver. "If they turn out to be all disappointments, we'll have a good three years to storm the gates at the White House."

Already, the liberal blogosphere is showing its influence.

John Brennan, Obama's top pick to head the CIA, suddenly withdrew his name from consideration under pressure this past week. His potential appointment had raised a firestorm among liberal blogs that associate him with the Bush administration's interrogation, detention and rendition policies. Within hours, blogs that raised concerns about Brennan's career claimed victory about their successful exercise in free speech.

The debt is starting to come due on Obama's promise of "change we can believe in." Except he meant "we" in a broader sense.

He promised to lead with a bipartisan spirit, the kind that could unify a country and allow him to get deals through Congress. From the moment he won, he implored people: "Let us resist the temptation to fall back on the same partisanship."

And then he set out to take his own advice.

Obama's courting of Republicans - for ideas, legislative support, and potential roles in his Cabinet - is drawing cautious attention from the liberal base of his Democratic Party. The concern, to the degree that it exists this soon, is that Obama's emphasis on governing from the center may undermine the left.

He still pledges to wind down the war in Iraq, but everything comes second to fixing the staggering economy right now. He has stood up in defense for Sen. Joe Lieberman, a virtual Democratic outcast these days, and sought help from his Republican presidential foe, Sen. John McCain.

Obama is building a government with several Clinton administration faces, a move that has underwhelmed some liberal voices who are eager for a more dramatic sense of change.

In one posting that seemed to echo in the Internet community, liberal blogger Chris Bowers wrote, "I feel incredibly frustrated. ... Isn't there ever a point when we can get an actual Democratic administration? Why isn't there a single member of Obama's Cabinet who will be advising him from the left?"

Christopher Hayes, the Washington-based editor of The Nation, offered his own lament about a lack of progressive candidates for prominent leadership spots. He said the left has been right about Iraq, financial deregulation and global warming, and yet "no one who comes from the part of American political and intellectual life that has given birth to all of these ideas is anywhere to be found within miles of the Obama Cabinet so far."

Obama pushed back a bit this past week, saying his advisers will blend "experience with fresh thinking."

Of course, he is not done picking his Cabinet, let alone occupying the Oval Office yet. Any rumblings of discontent at this point show that expectations for Obama are enormous within his party. Labor unions and liberal groups spent big money and knocked on countless doors to help get Obama elected.

The undercurrent of concern is not that Obama, granted the title of most liberal senator in one prominent ranking, will suddenly abandon the people who helped elect him or change course on core causes. Rather, it is that liberal side of his party may have to wait longer for victories, and accept smaller ones.

That is the reality of governance right now.

The economy is in such remarkably dreadful shape that Obama may get a pass on other matters while he tries to fix that one.

An early test will be how Obama's team works with congressional leaders and appropriations committee chairmen on his first priority, a massive bill to stimulate the economy. If Democrats go too far left on it, they may lose some conservative members of their own caucus and give Obama some fits.

The left could get early legislative victories on expanded health care for children from poor families, and looser restrictions on federally funded embryonic stem cell research. Obama's stimulus plan is bound to include spending and jobs supported by labor.

As for the anxious anti-war crowd, which helped propel Obama's campaign in its early days, Obama adviser David Axelrod said the new president will not renege on winding down the conflict in Iraq.

Obama says the challenges are simply too huge for the politics of labels; Democrats and Republicans must work together. Pragmatism rules.

"I think what the American people want more than anything is just common sense, smart government," he said. "They don't want ideology."