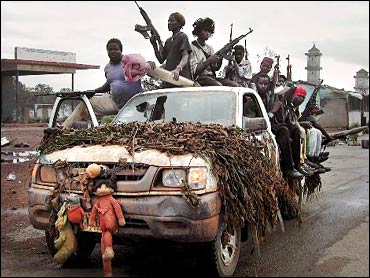 Liberia's rebels pleaded for the United States to send peacekeepers to the West African country, while a U.S. diplomat played down the possibility of a major role for American troops.

As Liberia awaited word on U.S. troops, the defense minister on Tuesday accused rebel forces of violating a fragile cease-fire in northern parts of the country. U.S. military advisers also prepared to evaluate water and sewage lines in the devastated capital.

Defense Minister Daniel Chea returned from the north and said government forces are ordered only to fight in self-defense.

The rebels, meanwhile, deny instigating attacks in the north.

"Since we signed the cease-fire we haven't released one bullet," Eugene Wilson, a spokesman for the rebel Movement for Democracy in Liberia, or MODEL, said from nearby Ghana where he was attending peace talks.

The rebels, who control about 60 percent of the country, pushed into the capital last month but were pushed back by President Charles Taylor's forces. The fighting killed hundreds of people and was just the latest violence in a four-year insurgency.

West African nations have promised to send 1,500 troops within days but urged the United States to take the lead.

But a Western diplomat in the region, speaking on condition of anonymity, said it would be "difficult to imagine," U.S. forces patrolling cease-fire lines.

The diplomat appeared to support the idea that the United States would likely play a support role, providing logistical and financial help to regional forces monitoring the cease-fire.

Kabineh Ja'Neh, a high-ranking official from the main rebel group, said American forces did not have to be on the front line to make a difference.

"The mere presence of American soldiers with arms is sufficient," Ja'Neh said from Ghana, where he was attending peace talks. "It would be a monumental psychological comfort and would signal an end to the war."

Taylor, under pressure to step down and wanted on a war crimes indictment in Sierra Leone, also wants an American role. He has said he will only step down once peacekeepers arrive.

In Washington, President Bush said a deployment could require American troops but would be "limited in size and limited in tenure." He spoke Monday after meeting with U.N. Secretary-General Kofi Annan, who wants an American deployment, and said any deployment would depend on Taylor stepping down and leaving the country.

Mr. Bush said he was awaiting reports from two teams he sent to assess the situation in Liberia, a West African nation founded by former U.S. slaves in the 19th century. One team is reviewing the humanitarian needs there, and the other is checking the military situation.

Annan and others have called on the United States to follow in Liberia, which has strong ties to the United States, the example set by Britain in Sierra Leone and France in Ivory Coast, where troops helped calm civil wars.

U.S. military advisers focused Tuesday on humanitarian needs, assessing how sewage and water systems can be rebuilt in Monrovia. The only accessible water in the city now comes from wells. Aid groups say they have seen signs of malnutrition and cholera in camps set up for the country's enormous population of displaced people.

The team also was to confer with officials working in construction and agriculture about rebuilding efforts in this country after years of chaos and war.

On Monday, the Liberian Information Minister Reginald Goodrich accused rebels of violating the fragile cease-fire by attacking two northern towns and said they were making a final push on Monrovia.

"We can only do our best to hold the line," Goodrich said. "It is in the interest of everyone for peacekeepers to get here as soon as they can."

Ja'Neh, a leader of Liberians United for Reconciliation and Democracy, said he was not aware of any intense battles.

Liberia's government has been accused of fabricating or inflating attack claims in an effort to win local and international sympathy.

The U.S. team of military experts arrived in Liberia last week. They have visited refugee camps, ports and landing strips to assess the possibility of sending troops and aid.

A hundred U.S. troops arrived Sunday in neighboring Sierra Leone in case the team in Liberia needs to be evacuated, said Capt. Kristi Becknan, a spokeswoman with the U.S. Air Force.

More American military specialists were in Ghana over the weekend to coordinate with the West African regional bloc that has promised to send troops. While some planned to leave soon, others were planning to remain behind to coordinate peace efforts.

A Nigerian officer, Brig. Gen. Festus Okonkwo, has been chosen to lead that force, mandated to monitor cease-fire lines in and around Monrovia, said Sunny Ugo, spokesman for the Economic Community of West African States.

Taylor is charged with war crimes for this alleged support for rebels in Sierra Leone's brutal war.