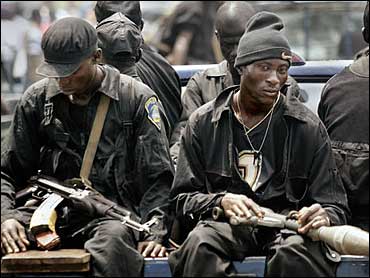 Rebels waging a brutal battle for control of Liberia's war-divided capital announced a cease-fire after one of the most blood-soaked days in three years of civil war.

Meanwhile, West African defense chiefs struggled Tuesday to work out details of a long-awaited peacekeeping force many here believe could have averted the carnage earlier this week.

Despite Tuesday's order to stop fighting, rebel fighters traded machine-gun and grenade fire near three strategic bridges connecting Monrovia's port area to the northern suburbs and downtown — the symbolic heart of the country and site of President Charles Taylor's offices.

Sporadic shelling also continued, with one round striking a house across the street from the heavily fortified U.S. Embassy compound. Shrapnel rained down on a second house next to the embassy.

Three people were killed and two seriously wounded. Grief-stricken relatives wailed around pools of blood and held up mortar fragments.

"Our sisters and brothers are dying for nothing," said James Guanue, brother of one of the dead. "We really need a peacekeeping force to come."

Aid workers had been removing the last of a pile of bodies dragged in front of the embassy Monday by enraged residents, demanding to know when the United States would send troops to the country founded more than 150 years ago by freed American slaves.

There has been an outcry from aid groups and Oxfam said in a statement that "the delay in sending peacekeeping troops to Liberia is costing lives."

Hospital officials and aid groups counted more than 100 killed Monday, but the toll was believed to be much higher. Defense Minister Daniel Chea placed it at well over 600.

Chea demanded the international community either send peacekeepers immediately or lift an arms embargo imposed by the United Nations to punish Taylor's regime for trading guns for diamonds with Sierra Leone's notoriously brutal rebels. "Our people are being held hostage," he said.

White House spokesman Scott McClellan said the United States had not yet decided whether to send troops. "We're continuing to monitor events closely," he said in Washington

Three U.S. ships with 2,000 marines and 2,500 sailors aboard moved toward the Mediterranean, where they are to await orders on whether to proceed around to Liberia. Typically, only the 2,000 marines would go ashore.

On Monday, about half of 41-member U.S. Marines security team arrived to protect the embassy, and their helicopters evacuated 23 foreigners, most humanitarian workers. The rest of the marine group was delayed by the mortar attack, and there was no indication when they would arrive.

Meanwhile, government and rebel delegates meeting in nearby Accra, Ghana struggled to meet a Tuesday deadline to agree on details of a unity government promised under a repeatedly violated June 17 cease-fire.

Despite continued differences, Charles Benny of the main rebel group Liberians United for Reconciliation and Democracy movement expressed satisfaction with recent progress on the promised peacekeeping force. "Our troops are being told to cease fire," he said.

One option, he said, was to divert to Liberia a Nigerian mechanized infantry battalion of some 700 to 1,000 troops from Sierra Leone, where the soldiers have taken part in a U.N. peacekeeping force.

The participants also want other countries — including South Africa, Morocco and the United States — to send soldiers.

European diplomats said a cease-fire was key to any deployment — particularly if the Americans are to be persuaded to participate.

"They haven't taken a decision yet in Washington," Hans Dahlgren, the European Union's special regional envoy, told Swedish Radio on Tuesday. "And I am sure that one of the factors is whether there is really going to be a peace agreement to supervise."

Bush has made any deployment of U.S. troops conditional on the departure of Taylor, a former warlord indicted for war crimes in Sierra Leone.

Taylor has pledged to resign and accept an offer of asylum in Nigeria — but only after peacekeepers arrive to ensure an orderly transition.

In an interview with the New York Times, Taylor reportedly said he would step aside "within 10 days" and hand over power to the speaker of the House of representatives, Yundueh Monorkomna. Taylor would make the formal announcement Saturday, the Times reported Wednesday. Taylor has repeatedly amended his resignation plans.

Since sweeping into the northern part of Monrovia on Saturday, rebels have made repeated attempts to cross into downtown, which lies on a strip of land between a river and the Atlantic Ocean.

Residents took advantage of a slight lull in hostilities Tuesday to forage for food and water in the bombed-out capital — still in ruins from Liberia's last 1989-96 civil war.

Sylvester Coleman, a seminary student, emerged from his basement, where 63 relatives and neighbors have sought shelter, to look for rice but went home empty handed because it was too expensive.

Passing the U.S. embassy, where bodies were still piled up under plastic sheeting, he paused. Twenty-seven people were killed when a mortar slammed into an embassy residential compound across the street, where some 10,000 Liberians had taken refuge.

"No country has stronger historical ties to Liberia than the United States, so to sit idly by, it's just a shame," he said. "If the American forces were on the ground, this would not have happened."