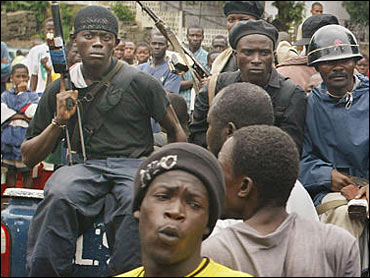 Rebels took control of a key bridge at Liberia's capital Wednesday in fighting that shattered a day-old cease-fire pledge, sending thousands of families fleeing in a city desperately short of food, water and shelter.

Separately, West African foreign ministers meeting in Dakar, Senegal promised to deploy two Nigerian battalions to Liberia within days — vanguard of what ministers said should be a 3,250-strong international force to bring peace to the devastated nation.

Explosions boomed in the capital, Monrovia, on Wednesday, one day after rebel leaders announced a unilateral cease-fire.

"This morning we're still under attack," Defense Minister Daniel Chea said after a night of shelling and gunfire. "It's still raining round after round of mortars."

As for the rebels' cease-fire pledge, Chea said, "I'm not impressed at all."

By midday, rebels took and crossed the city's Stockton Bridge, Lt. General Roland Duo said. Controlling the bridge opens northern suburbs to the rebels, putting them in position to cut off the road to the main airport and encircle the capital.

Civilians fled northern neighborhoods as government forces fought to repel the rebel advance. Women clutching the hands of children ran east, away from the fighting, in heavy rain.

Aid workers were cut off from the city's cemeteries by the battles, so they buried victims of fighting in Monrovia's beaches, shoveling corpses into the sand under driving rains near the stormy, steel-gray Atlantic.

Fighting has pushed hundreds of thousands of civilians into Monrovia, swelling the normal population of 1 million.

Battles since Saturday have cut the overwhelmed city off from food and water, with rebels taking the port where aid warehouses are filled with food.

Near the U.S. Embassy, where at least 10,000 people have crowded hoping for safety, vendors Wednesday sold individual cups of flour and corn meal from stolen World Food Program bags. Merchants said fighters looted the bags from port warehouses and then sold them.

Dozens of disabled people in wheelchairs gathered in front of the embassy, chanting, "We want food! We want food!"

The U.S. Embassy remains staffed and heavily guarded by American forces, and is the key hope for residents of this nation founded by freed American slaves in the 19th century.

"I used to go beg in the streets but now there is nobody outside," said James Sando, an 18-year-old polio victim in a wooly blue cap and a wheelchair.

"That is why I came to the embassy, to tell them if they can't give us peace that they must give us food."

Families used any lulls in fighting to search for food.

"My smallest one keeps saying, 'Pappy, I want to eat.' He is six years old. He knows nothing about these wars," said Emmanuel Jackson, 55, trying to feed his wife and seven children, sheltered under concrete stairs in an apartment building since the fighting.

Aid workers said Wednesday they were logging 350 new cholera cases a week, and expected the epidemic to surge.

Rebels have taken the area where a water plant was run by the European Union. With no running water since at least Saturday, the refugee-swelled city was depending on an inadequate number of wells, many contaminated.

In Dakar, West African leaders said two Nigerian battalions of 650 men each would be deployed within days. The battalions were on standby in Nigeria and in Liberia's neighbor, Sierra Leone.

West African leaders want the United States to participate in a peacekeeping force, but American officials have not yet committed troops.

Micheal Pelletier, a U.S. Embassy official, said at the Dakar talks that the United States wants the regional economic bloc ECOWAS to take the lead role in a deployment. The United States has said it would support, not lead, a peacekeeping operation.

Three U.S. ships with 2,000 Marines and 2,500 sailors aboard were moving toward the Mediterranean Sea and awaiting orders.

President Bush has made any deployment of U.S. troops conditional on the departure of President Charles Taylor, a former warlord indicted for war crimes in Sierra Leone.

Taylor has pledged to accept Nigeria's offer of asylum — but only after peacekeepers arrive to ensure an orderly transition.

Taylor told The New York Times he would step aside within 10 days and hand over power to the speaker of the House of Representatives, Yundueh Monorkomna. Taylor will make the formal announcement Saturday, the Times reported Wednesday.

During the past two months, Taylor has announced and then amended plans to resign.

On Wednesday, Chea suggested Taylor will remain as long as fighting rages.

"The president has definitely agreed to go to Nigeria," Chea told The Associated Press. "But he is not going to go under these circumstances."

"You know how many times he has said this kind of thing? We'll make sure he leaves."