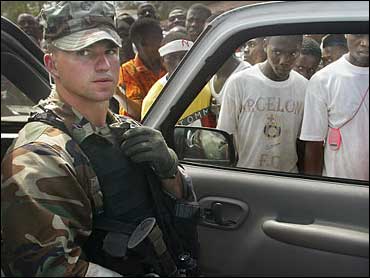 Liberian villagers pleading for an American-led rescue mission flooded a runway when U.S. military experts toured an airfield Wednesday as part of efforts to decide whether to send peacekeeping troops to help end the carnage in the West African country.

Chanting "We want peace, no more war," the excited villagers ran up and down the runway in the pouring rain. Liberian soldiers kept them away, as U.S. assessors in fatigues tried to determine whether the airfield could be used to bring in relief supplies and other material.

The United States faces mounting international pressure to send troops to lead a peacekeeping force in Liberia, a nation founded by freed American slaves in the 19th century and torn by a decade of civil strife. But Washington is wary of becoming too deeply involved in a West African conflict.

President Bush, speaking Wednesday in South Africa on the second stop of a five-nation African tour, promised to work with the United Nations and African countries to enforce an oft-violated cease-fire, and "see to see to it that Mr. Taylor leaves office so there can be a peaceful transition in Liberia."

Despite the tens of thousands of U.S. troops in Iraq, Afghanistan and other hotspots, Mr. Bush denied it would overextend American forces were he to send peacekeepers to Liberia, reports CBS News White House Correspondent Mark Knoller.

The United Nations and European leaders have sought U.S. troops to enforce the June 17 cease-fire between forces loyal to Taylor and rebels fighting to oust him. West African nations have offered 3,000 troops and suggested the United States contribute 2,000.

Taylor, a one-time warlord who is viewed by international prosecutors, diplomats and some Liberians as the main impediment to peace in the region, has repeatedly promised to step down. On Sunday, he accepted an offer of asylum from Nigerian President Olusegun Obasanjo, but on condition that an international force is deployed to ensure an orderly transition.

Many fear Taylor's departure could spark the kind of factional violence that overran Monrovia during a 1989-96 civil war. Taylor was elected president in 1997 with threats of plunging the country into bloodshed again if he lost.

Diplomats said the return of the U.N. workers will depend on whether military forces would be available to evacuate them again if necessary.

The 32-member U.S. team — including military experts on civilian affairs and a security component — arrived Monday to assess security conditions in Liberia and humanitarian needs of its 3 million people.

Thousands of eager Liberians swarmed their convoy Tuesday as they toured some of the camps housing tens of thousands of people displaced by the fighting.

"My wife and two children have both died" from hunger and disease, said the Rev. Terrance Dudley, who said he had been living for a month at Monrovia's athletics stadium, where displaced families sleep beneath the bleachers. "Now I'm so hungry, I'm afraid I may also die. I'm seeing double and my insides hurt at night. Can you help me?"