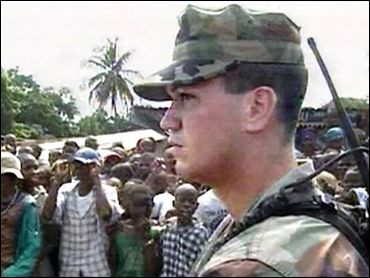 Waving hankies and American flags, refugees swarmed the U.S. team's convoy as it visited some of the camps housing tens of thousands of people displaced by the fighting.

At a high school where 18,000 people live, crowds thronged the delegation, clambering over vehicles and chanting, "No more war, we want rest!"

"My wife and two children have both died" from hunger and disease, said the Rev. Terrance Dudley, who said he had been living in the stadium for a month. "Now I'm so hungry, I'm afraid I may also die. I'm seeing double and my insides hurt at night. Can you help me?"

The United States faces mounting international pressure to send troops to lead a peacekeeping force in Liberia, a nation founded by freed American slaves in the 19th century. But Washington is wary of becoming too deeply involved in a West African conflict and says it wants President Charles Taylor to step down first.

President Bush, speaking Tuesday in Senegal on the first stop of a five-nation African tour, inched closer to committing peacekeeping forces in Liberia. He said the United States would work with African countries to enforce a cease-fire, but had not yet decided the extent of its participation.

Aides said Bush's comments signaled there would be some involvement of U.S. forces, although the size and role of such a contingent remains an open question.

Indicted on war crimes charges, his capital surrounded by rebels, Taylor — a one-time Boston gas station attendant, escapee from a Massachusetts jail and warlord — is viewed by international prosecutors, diplomats and some Liberians as the main impediment to peace in the region.

The United Nations and European leaders have sought U.S. troops to enforce the June 17 cease-fire between forces loyal to Taylor and rebels fighting to oust him. West African nations have offered 3,000 troops and suggested the United States contribute 2,000.

Taylor has also urged the United States to send troops. "They owe it to us," he said in an interview Monday with The Associated Press.

In the past month, Taylor has repeatedly promised to step down. On Sunday, he accepted an offer of asylum from Nigerian President Olusegun Obasanjo, but on condition that an international stabilization force is deployed to ensure an orderly transition.

Many fear Taylor's departure could spark the kind of factional violence that overran Monrovia during a 1989-96 civil war.

"Why doesn't U.S. send the peacekeepers?" complained Kareem Koffa, who was selling gas out of jerry cans by the roadside. "If they don't, people will go on a rampage if Taylor steps down. It will be too dangerous for normal people who don't have weapons."

The 32-member U.S. team — including military experts on civilian affairs and a security component — arrived Monday to assess security conditions in Liberia and humanitarian needs of its 3 million people — suffering greatly from more than a decade of civil strife.

As the U.S. military experts moved through Monrovia on Tuesday, crowds chased their 15-vehicle convoy, which included U.S. diplomats and foreign journalists.

The delegation had planned to visit a camp in an abandoned Voice of America radio station compound, but was turned back at a checkpoint.

Defense Minister Daniel Chea later said the Americans were welcome to go wherever they wanted. But he said he had asked them, as a matter of protocol, to meet with him first to discuss their plans.

When the convoy re-entered the city, crowds formed again and in the confusion, a diplomatic car ran into a young boy.

As diplomats loaded the child into the vehicle to get medical treatment, the throng grew again. Without warning, Liberian police special forces deployed on a bridge fired shots in the air to disperse them.

U.S. servicemen at the front of the convoy jumped out of their vehicle and briefly took aim at the policemen until they realized what was happening, witnesses said.

A U.S. Embassy statement welcomed the "enthusiastic support" but appealed for calm. "The U.S. is undertaking this assessment because it is deeply concerned with the plight of the Liberian people," it said.

Taylor made it clear Monday he still considers himself in charge of the country where he waged civil war for seven years as a rebel leader, before being elected president in 1997 with threats of plunging the country into bloodshed again if he lost.

"Unless the peacekeepers come, he's not going to leave," said Momoh Kerkura, an accounting student. "That's why we really want them."