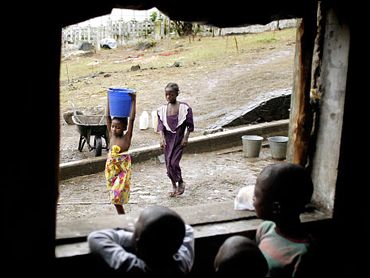 Dressed in white, blessed by an evangelist and accompanied by former U.S. congressmen, Liberia's warlord-turned-president told refugees huddled Wednesday at a crumbling stadium that he foresees "total destruction" if he leaves office before international troops arrive.

Charles Taylor, an indicted war criminal who sparked Liberia's ongoing strife with his 1989-1996 insurrection, also told his war-weary countrymen he no longer will fight. That generated the loudest cheers among those sheltering from the latest battles.

Taylor has promised many times to leave this west African nation founded by freed American slaves more than a century ago. He said Wednesday his departure hinges on the arrival of a regional peacekeeping force that he and many Liberians hope will include Americans.

"If I were to leave this country before the peacekeeping troops arrive in this city, I see disaster," Taylor said. "I see trouble. I see murder, mayhem. I see rape. I see total destruction."

President Bush repeatedly has called on Taylor to step down, undercutting Taylor's reputation in a nation that holds the United States in such high regard.

Taylor, former U.S. Reps. Bob Clement of Tennessee and Ronnie Shows of Mississippi, and a Washington-based evangelist held an impromptu prayer rally at the moldy stadium, where tens of thousands of refugees have turned its bleachers and underbelly into makeshift homes.

The rally, at which Indian Christian evangelist K. A. Paul said an international day of fasting for peace in Liberia would be held July 26, interrupted food distribution.

Long lines of hungry refugees were forced by gun-toting security forces to make way for Taylor and his entourage, including a military band wearing fatigues and cracked boots. Two of Taylor's elite soldiers — one with an AK-47 slung over his shoulder — circled the racetrack on a motorbike.

Taylor emerged from a shiny black sedan to a gospel choir singing "How Great Thou Art." He told the rally he would step down to "give you, the Liberian people, a chance to live."

Hundreds of thousands of people have been killed in the past 14 years of fighting. As Taylor spoke, a three-year campaign by rebels to drive him out neared its final act.

If ongoing peace talks in neighboring Ghana collapse, a full-scale battle for the capital, now crowded with hundreds of thousands of refugees trapped between the rebels and the Atlantic Ocean, could follow.

"My decision to step down is based on the fact that the greatest gift I can give you now are two things, the gift of life and the gift of peace," Taylor said. "My life is no more important than your lives."

The government again accused the rebels of violating an oft-broken June cease-fire, saying fighting continued in Liberia's north and northeast. Rebels denied it.

At talks in nearby Ghana, negotiators were discussing a proposal to set up an interim government without Taylor or the leaders of the two rebel groups seeking to oust him.

Annan said the parties involved have agreed that West Africa first will send up to 1,500 troops to Liberia within two weeks. Taylor then would leave and American and other reinforcements would join the West Africans, he said.

In the long term, a U.N. peacekeeping force would take over.

In Washington, President Bush said this week that a deployment could require American troops but would be "limited in size and limited in tenure."

A U.S. team of military experts arrived in Liberia last week. They have visited refugee camps, ports and landing strips to assess the possibility of sending troops and aid.

Taylor has been indicted for war crimes in neighboring Sierra Leone, accused of supporting a brutal rebel movement known for hacking off civilian's hands, feet, ears, noses and lips.