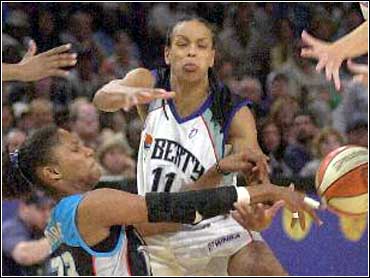 The New York Liberty's 19-0 first-half run forced another game. The Cleveland Rockers' strong second half gave them hope for the finale on Monday night.

"It was two entirely different games in the first and second halves," Liberty coach Richie Adubato said Sunday after his team held on for a 51-45 victory that evened the best-of-three WNBA playoff series 1-1. "I feel confident about tomorrow because there's no question the fans help us with our emotion and determination, but I'm concerned with the way we let down in the second half."

Tamika Whitmore had the first two baskets and the last two during New York's 10-minute run that turned a 7-5 deficit into a 24-7 lead for the Liberty, who lost the best-of-three series opener 56-43.

"We came out very intense and very aggressive, controlled the backboards and were able to get out and run and get some easy baskets," Adubato said of the first half. "They outrebounded us by 10 in the second half and had eight offensive rebounds, so we weren't able to run, and consequently we only scored 15 points in the second half."

The Liberty, who have won 12 straight at Madison Square Garden, play host for the Eastern Conference series finale Monday night. The winner advances to the WNBA Finals against Los Angeles or Houston, which has won all three league titles, twice defeating New York in the final round.

Jones led the Rockers' second-half turnaround scoring 14 points on 6-for-11 shooting after missing three of her four shots in the first half.

"I tried to do the little things and go to the basket more," Jones said. "I think we have a great chance tomorrow night. I don't think our first half was anything they did to us, and we showed that in the second half."

But Hammon responded with a jumper and a steal that led to a layup by Vickie Johnson, giving New York a 49-36 advantage with 5:51 remaining

A 3-pointer by Jones closed the Rockers to 51-43 with 1:53 left, but they missed three 3-pointers down the stretch and managed just one more basket with 8.7 seconds to go.

"We got the advantage because we're playing at home, and we're very tough to beat at home," Hammon said. "It's our territory and we're not gong to let anybody come in here and steal something from us."

Cleveland made its first two field-goal attempts and its last four of the first half, but in between, the Rockers missed 17 straight. They went 14 1/2 minutes, from 18:52 left to 4:42 to go in the half, without a basket.

"I think it was more our offense than their defense that caused it," Rockers coach Dan Hughes said. "We needed a more assertive attitude. We were a little anxious, playing a little too fast."

The Liberty, who led 36-17 at halftime, outrebounded Cleveland 16-14 in the first half, but the Rockers had a 20-10 rebounding margin in the second half.