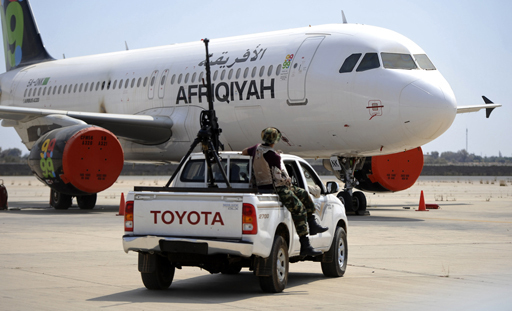 (CBS/AP) TRIPOLI, Libya - A group of disgruntled militiamen took over the country's main airport on Monday, storming it with heavy machine guns and armored vehicles and forcing airport authorities to divert flights, a security official said.

Mohammed el-Gharyani of Tripoli Security Committee said militiamen from the city of Tarhouna occupied the airport runway. Flights were diverted to Metiga air base in the city's center.

He said the militiamen were angry over arrest of their commander, Abu Elija, on Sunday.

Clashes broke out at the airport Monday after the militia took it over, the Reuters news agency reported. Gunfire was heard, and men were seen carrying rocket-propelled grenades inside.

Tarhouna in central Libya was widely seen as a favorite of deposed ruler Muammar Qaddafi. Its dominant tribe, also called Tarhouna, held many positions in the Libyan military under Qaddafi. The city's residents are viewed with suspicion by former rebels.

Tribal rivalries have swept Libya since Qaddafi was overthrown last year. Much of the fighting has pitted militias that fought Qaddafi against those who remained loyal to his regime.

The Tarhouna group has been engaged in sporadic clashes with other militias from cities like Misrata and Tripoli. Abu Elija was arrested in Tripoli, according to el-Gharyani, but circumstances of his arrest were not immediately clear.

The attack on the airport came just two weeks before the date of the country's first general elections since 1969, when Qaddafi took over power in a military coup. On June 19, Libyans are scheduled to elect 200-member assembly to oversee writing a new constitution and form a government.

Election commission and government officials have recently given contradictory statements about the possibility that elections might be delayed, given the fragile security situation in Tripoli and many other cities.

Also, there have been calls to boycott the election in the eastern part of the country, where the uprising against Qaddafi started. Many easterners are demanding more representation in the assembly.