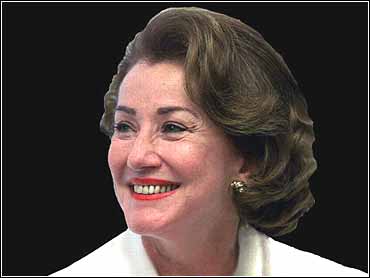 Elizabeth Dole is weighing a race for the Senate in North Carolina in 2002 in the event Republican Sen. Jesse Helms retires next year rather than seeking a sixth term.

"If he decides not to seek re-election, I would give it serious consideration," Dole said in a statement through spokeswoman Gia Colombraro.

Dole has had some discussions about her plans with Sen. Bill Frist, R-Tenn., chairman of the Senate GOP campaign committee, according to Republicans familiar with the developments.

Helms is expected to announce this fall whether he will seek another term. The 79-year-old conservative icon has suffered from health problems in recent years, including an ailment that numbs his feet and impairs his balance. He also had knee replacement surgery in 1998, and customarily sits at his desk rather than standing when speaking on the Senate floor.

State Republican Party Chairman Bill Cobey said Monday that Helms was his preferred candidate, but Helms' age and health problems have fed rumors that he may leave office.

While Helms has won five terms without a defeat, he always draws a tough opponent. And whether or not he retires next year, the North Carolina race is likely to be one of the most fiercely contested in the nation, particularly with Democrats holding just a 50-49 majority, with one independent.

Thus far, only one senator in either party, Sen. Strom Thurmond, R-S.C., has announced retirement plans, and most incumbents, regardless of their party, appear to be well-positioned for re-election.

Dole led the American Red Cross for eight years before launching an unsuccessful bid for the Republican presidential nomination in 1999. The wife of former Sen. Bob Dole of Kansas, she also is a former federal transportation secretary and labor secretary.

Helms' most recent campaign finance report showed little fund raising in the first half of the year. The report showed he raised $175,406 between January and June — a fraction of what Helms raised in 1996 when he was gearing up for a campaign that cost about $8 million.

By DAVID ESPO
©MMI The Associated Press. All Rights Reserved. This material may not be published, broadcast, rewritten, or redistributed