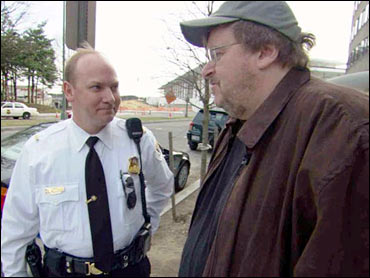 Miramax Films chiefs Bob and Harvey Weinstein plan to buy back Michael Moore's "Fahrenheit 9/11" - which Walt Disney Co. blocked Miramax from releasing - and distribute it themselves.

Under the deal, the brothers, who have a thorny relationship with parent company Disney, would not be able to distribute the movie through Miramax. They would have to find a third-party company.

"Fahrenheit 9/11" made its world premiere Wednesday as one of 18 films in competition at the Cannes Film Festival in France, where many new movies find business partners for distribution.

Disney chief executive Michael Eisner said last week that the company "did not want a film in the middle of the political process" because he believed that theme park and entertainment consumers "do not look for us to take sides."

Moore, on his web site, tells another story about why Disney backed out of its agreement to distribute the film. He says CEO Michael Eisner told his agent that he would never let Disney be the one to get the movie into the theaters because he didn't want to anger Florida Gov. Jeb Bush and complicate Disney's situation, with millions of tax breaks and other incentives at stake.

Disney, according to the New York Times, has denied that this was its concern.

Moore meanwhile refutes suggestions that his outrage over Disney refusing to distribute his film as agreed was a put-on for the sake of publicity. Moore says that while Eisner's comments were made a year ago, the company went ahead with its deal to finance the movie so Moore did not expect any distribution problems.

This isn't the first change in the credits for "Farenheit 9/11," which originally had a deal with Mel Gibson's Icon Pictures. Miramax signed on in April 2003 as financier and distributor for the movie after Icon Pictures backed out.

Miramax co-founder Harvey Weinstein spent about $6 million on the film. He and his brother will have to repay Disney for the investment, and would likely insist on a deal that cuts Disney out of any future profits.

A similar deal was worked out in 1999 when Disney forced Miramax to give up filmmaker Kevin Smith's "Dogma," which took an irreverent approach to Catholicism with modern prophets, angels and apostles in a bid to stop the end of the world. Lions Gate Films eventually picked up "Dogma."

"We're very happy that Disney has agreed to sell 'Fahrenheit 9/11' to Bob and Harvey," Miramax said in a statement. "Bob and Harvey look forward to promptly completing this transaction."

Eisner confirmed the planned deal Wednesday afternoon in a conference call with financial analysts. He also lamented the negative press he and Disney received by refusing the film. "There's not much that we can do with Miramax that's not carried in the press," he said.

The deal could be a winner for the Weinstein brothers, who are known for their moviemaking savvy in both boardroom and screening room, with recent projects including "Cold Mountain," "Lord of the Rings: The Return of the King," and "Chicago."

Documentaries don't usually make box office news but that's not true of Michael Moore, whose 1989 "Roger & Me" about General Motors layoffs made millions, and who won an Academy Award for "Bowling for Columbine," his take on the Columbine High School shooting and U.S. gun control policy.

The latter film, released in 2002, earned $21.5 million at the box office - the highest-grossing documentary ever, and one which is still racking up sales in home video release.