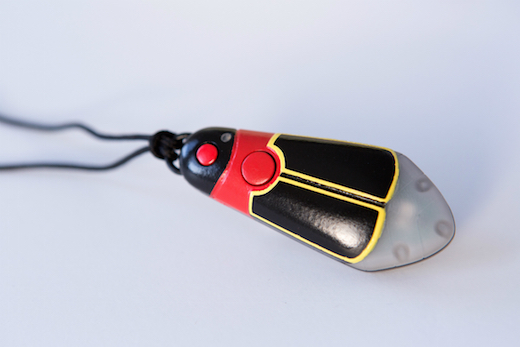 One of summer's most magical sights is an otherwise ordinary field or backyard illuminated by tiny, pulsing points of living light, as fireflies emerge at dusk. And now, a handheld gadget called the Firefly Communicator will allow people to take part in fireflies' light-coded "conversations."

With the device, which resembles the insect it was built to mimic, users can communicate with fireflies by pushing a single button to emit stored patterns of light pulses that copy actual firefly signals, issuing a "come hither" message that attracts fireflies and lets users observe them up close.

Fireflies send their coded messages using a chemical process called bioluminescence, which takes place in a specialized structure in their abdomens. The insect controls its own "light switch," triggering when the light goes on and off by regulating the amount of oxygen introduced into its light organ. [Gallery: Eye-Catching Bioluminescent Wonders]

Scientists have found that firefly species generate unique light patterns to communicate with their own kind and to attract mates. Some species also use light flashes to lure other fireflies as prey, with females imitating the coded messages of other firefly species to trick males into coming closer so they can eat them.

Inventor Joey Stein -- the Firefly Communicator's creator and the owner and lead interactive designer for Genus Ideas Inc. in New York City -- told Live Science that he collaborated with entomologists specializing in fireflies in order to identify known firefly communication codes for the device, and to test it in the field. He launched a Kickstarter campaign for the Firefly Communicator on March 14, and the project reached its $10,000 funding goal after only two weeks. The campaign has raised more than $14,000 to date.

Learning how to "speak firefly" is simple -- users download firefly communication codes into the device from Stein's Speak Firefly website or app (still in development) which transmit patterns that the communicator's light sensor reads when it is placed on a monitor or mobile screen. Stein explained that the signal patterns of North American species are already well documented, while scientists are still working to decode the patterns of fireflies on other continents. He added that the code database will be updated with user input as new light patterns are tested and identified.

It was Stein's own youthful interest in the natural world that inspired him to design interactive experiences that could spark a similar appreciation of nature among others. He told Live Science that he hopes the Firefly Communicator will serve as an "adventure tool," encouraging people of all ages to spend more time outside and to look a little more closely at the glowing insects that can often be found right in their own backyards.

"What's wonderful about this is that the fireflies come to you in a natural way," Stein said. "They'll flash if you catch them in a jar, but it probably won't be 'L-O-V-E' they're spelling out -- it might be another four-letter word."

The Kickstarter campaign for the Firefly Communicator -- which offers backers first access to the device -- runs through May 14.