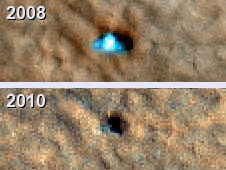 It was a good run but NASA has decided to discontinue efforts to reestablish contact with its Phoenix Mars Lander.

In a statement put out on Monday, the Jet Propulsion Laboratory said that the NASA's Mars Odyssey orbiter, which flew over the landing site 61 times, had failed to detect any transmission emanating from the vehicle. Three other listening campaigns involving other attempts to establish communications similarly proved unsuccessful.

NASA said that an image taken from an orbiting spacecraft indicated that the vehicle, thought to be near the Martian north pole, had suffered severe ice damage to its solar panels.

The lander arrived on the red planet on May 25, 2008. Perhaps its most lasting legacy was the discovery that Mars featured diverse wet environments over the course of the planet's history. What's more, NASA said that the Phoenix had returned more planetary data than all other Mars missions combined. Among the Phoenix's other achievements, the agency flagged the following:

Photographs released today by NASA show two images of the Phoenix. The above shot, taken in 2008, shows a couple of relatively blue spots on either side which correspond to the lander's clean circular solar panels. NASA said that the dark shadow in the 2010 image might  be the lander body and eastern solar panel, but that there was "no shadow from the western solar panel."