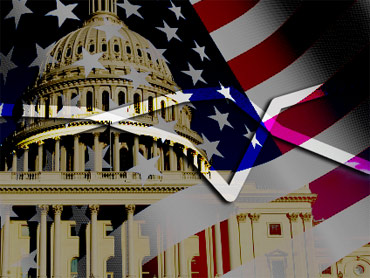 Political gridlock is supposed to be good for business. If bickering lawmakers can't agree on anything, the thinking goes, they can't pass laws and regulations that make the economy worse.

So will the midterm elections, which are expected to leave Congress at least partially controlled by Republicans and squaring off against a Democratic White House, be a help to the economy?

Don't count on it.

A standoff between the Obama administration and emboldened Republicans will probably block any new help for an economy squeezed by slow growth and high unemployment. Congress might also create paralyzing uncertainty for investors and businesses by fighting over taxes, deficits, health care and financial regulation.

If times were good, gridlock wouldn't matter so much. A Republican Congress and Democratic White House butted heads in the mid- and late '90s, after all, and their sparring did nothing to derail a strong economy.

But now, nearly a year and a half after the official end of the Great Recession, the economy still isn't growing fast enough to bring down unemployment, which is stuck at 9.6 percent.

In its Pledge to America, the GOP has vowed to oppose additional spending to stimulate the economy. President Barack Obama's plan to spend $50 billion on roads, railways and airports, for instance, is probably dead. And the new Congress may resist continuing to extend benefits to the 6.1 million long-term unemployed, at least without cutting the budget elsewhere.

Federal Reserve Chairman Ben Bernanke has said lawmakers need to do more to jump-start the economy. Otherwise, more pressure will fall on the Fed to find a way to help, Gardner writes. But the Fed has already pushed short-term interest rates to zero. And its remaining option buying Treasury bonds to pump cash into the economy is risky and unproven.

Republicans have promised to repeal Obama's massive health care law and are likely to try to scale back the overhaul of financial regulation that the outgoing Democratic Congress passed last summer.

Health care companies, insurers and banks would welcome relief from regulation. But Republicans probably won't have enough votes to overcome a presidential veto. And tinkering with existing law risks creating even more uncertainty for employers already reluctant to hire workers or buy new equipment because of doubts about where the economy is going.

"It seems impossible to me there won't be more uncertainty after the election," says Yale's Hacker, co-author of "Winner-Take-All Politics."

Wall Street research also disputes the notion that gridlock is good for the stock market, showing that stocks do just as well, or better, when one party runs both the White House and Congress.

Reviewing stock market and election results dating to 1950, Fidelity Investments concluded that stocks soar the year after midterm elections, with or without divided government.

Stocks of small companies surge an average of about 46 percent in the year after a midterm election that gives one party control of both Congress and the White House, Fidelity's research found. That compares with a gain of about 24 percent after the government is left divided. Large-company stocks perform about the same either way.

William Galston, senior fellow at the Brookings Institution and a domestic policy adviser in the Clinton administration, says compromises in the next Congress are possible. Lawmakers in both parties might support a grand tax bargain that would trade lower corporate rates for fewer loopholes. Each could claim to have made the tax code more efficient.

And Obama might get more support from Republicans than Democrats for a free trade agreement he's working on with South Korea.

The two parties appear to be moving toward a deal to extend tax breaks passed during President George W. Bush's first term that are scheduled to expire Dec. 31. Obama wants to renew the cuts only for families earning less than $250,000 a year.

He says the government, having run a $1.3 trillion deficit for the just-ended budget year, can't afford to continue tax breaks for the wealthy, too. Republicans want the breaks renewed for everybody, arguing it would be folly to let taxes rise on anybody when the economy is so fragile.

Joseph Quinlan, chief market strategist at U.S. Trust, expects the government to "kick the can down the road" with a deal to extend all the tax breaks for one year. Even so, renewing the tax cuts doesn't do anything new for the economy. They have been in place since before the Great Recession and throughout its dismal aftermath.

The prospect for a big breakthrough in economic policy seems low if the two parties battle each other to a standstill through the 2012 presidential election.

"Short-term gridlock is very bad for the outlook," Bank of America analysts say in a report on the election. "In today's challenging environment, inaction is dangerous."