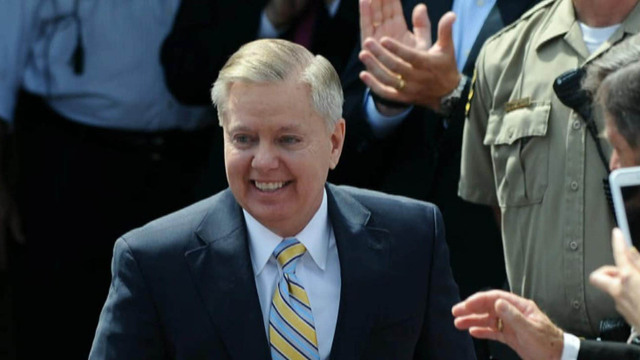 Lindsey Graham, the South Carolina senator and former 2016 presidential candidate, has only dire predictions about what will happen in November with Donald Trump as the GOP nominee.

"We're going to lose," Graham said on CBS News Tuesday evening. "You'll never convince me that Donald Trump is the answer to the problem we have with Hispanics. It will tear the party apart, it will divide conservatism, and we're gonna lose to Hillary Clinton and have the third term of Barack Obama."

He did not talk about "if" the GOP loses to the Democratic front-runner, but rather "when."

"Here's what I want to tell people when we lose to Hillary: I told you that the immigration issue is killing us. We're doubling down on the problem we have with Hispanics. We went from self-deportation to forced deportation. Have you ever heard the statement too big to fail? We're too stubborn to win," Graham said. "So here's what I'm going to say in November when we lose: I told you so."

The problem, is that Graham -- who freely admits that he got "beat like a drum" and said his words should be taken with a grain of salt -- does not see a viable path for one of a remaining candidates. "Short of a major scandal," he said, Trump will likely be the nominee.

"Ted Cruz is not my favorite by any means and I don't wish him ill,...but we may be in a position where we have to rally around Ted Cruz as the only way to stop Donald Trump and I'm not so sure that would work," he said.

He said that GOP voters view Trump as a strong leader who can't be bought, can fix Washington and put America's enemies back in line. But he sees "a demagogue, somebody who has solutions that will never work, that is playing on people's prejudices and the dark side of politics."

The GOP, Graham said, is in a "demographic death spiral" with Hispanics and young voters, and he begged his party to "quit beating up on the Hispanic community."

"Donald Trump's not the answer to our problems," he said.