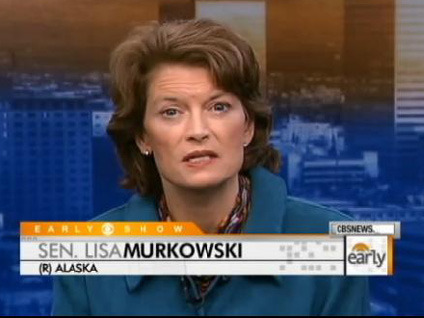 Republican Sen. Lisa Murkowski, who last night declared victory in the Alaska Senate race as a write-in candidate, declared that "Alaskans have spoken" on an appearance on CBS' "Early Show" this morning. She added that her Republican opponent, Joe Miller, lacked the votes to pose a significant threat in a potential recount or court challenges.

"We did the unprecedented. We made history. Over 100,000 Alaskans affirmatively said, 'It's important to me and to this election to fill in the oval and spell out my name correctly,'" Murkowski said. "Alaskans have spoken - and they've written it out, as well. It's pretty historic."

The Associated Press declared Murkowski winner of the contentious three-way Alaska Senate race on Wednesday, with her leading Miller by about 10,000 votes in state counts, pending challenges. Alaskans cast an undisputed 92,715 votes for Murkowski in the election, while Joe Miller had about 9,400. Another 8,100 votes were counted in her favor by state elections officials, but are being disputed by Miller's campaign. The last outstanding absentee ballots were counted on Wednesday night.

The incumbent Senator, who announced her write-in campaign after a devastating primary loss to Tea Party Republican Joe Miller in September, attributed her apparent success to a "phenomenal coalition of Alaskans," as she told NBC's Matt Lauer on the "Today Show."

Murkowski is the first candidate to win a major electoral race via write-in candidacy in more than 50 years, and only the second in history.

Miller has refused to concede the race, calling state the voting system "suspect," and threatening to call for a recount.

"It's not that we believe necessarily that we're going to come out on top," Miller said in an interview with the Anchorage Daily News, emphasizing that his goal was to make sure that the electoral process had been carried out with legitimacy.

When asked if he thought he still had a shot at beating Murkowski in the contest, Miller said, "I don't think it's impossible."

Murkowski, however, argues that it is indeed impossible for Miller to pull out a victory. "The numbers are just not there for him," she said on the "Early Show." "I think that Mr. Miller recognizes that as well."

The Alaska Republican party is asking Miller to step aside now. "We call on Joe Miller to respect the will of the voters and end his campaign in a dignified manner," chairman Randy Ruedrich said in a statement, according to the Anchorage Daily News.

Murkowski, who ran as a write-in candidate but will continue to caucus with Republicans in the Senate, has signaled her willingness to work with the Obama administration. "We have too much to do for these next two years to be focused on who's going to be president, or who's going to be leading the Senate in 2012," she told Matt Lauer.