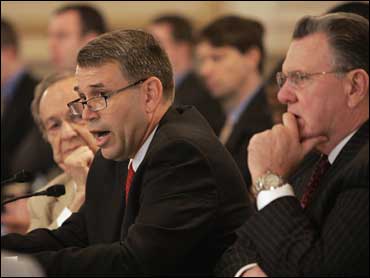 The number of American service members in Iraq has climbed to a record high of 168,000, and is moving toward a peak of 172,000 in the coming weeks - a level that could extend into December, Maj. Gen. Richard Sherlock said today.

Sherlock, director of operations for the Joint Chiefs of Staff, said the increase is the result of troop rotations, as several brigades overlap while they move in and out of the war zone. Previously, officials had predicted the number could go up to about 171,000.

President Bush ordered a buildup of about 30,000 troops early this year in an effort to quell the violence in and around Baghdad and provide enough security to stabilize the government.

After the rotations are complete, Sherlock said, the number of troops should drop back down to about 162,000 or a bit less. The temporary buildup comes just as the military, the Bush administration and Congress are deciding the future war strategy.

Meanwhile, a panel of top military and police officials sent by Congress to get an independent evaluation of Iraq's security forces reported that its national police force is so bad it should be scrapped and re-made and its army can't yet keep the peace or protect the borders, CBS News correspondent Bob Fuss reports.

The Independent Commission on the Security Forces of Iraq recommended on Thursday the United States lighten its footprint in Iraq to counter its image as an "occupying force."

More specifically, the panel said the mission of U.S. troops could be adjusted as early as next year to allow the Iraqi army to assume more control of daily combat.

Retired Marine Corps General James Jones, who led the 20-member commission, told the Senate Armed Services Committee on Thursday that "the force footprint should be adjusted in our view to represent an expeditionary capability and to combat a permanent-force image of today's presence."

"This will make an eventual departure much easier," he said.

Jones' report, widely reported on Wednesday and released Thursday, concluded that Iraqi security forces would be unable to take control of their country in the next 18 months.

Jones said he personally would not support setting a deadline for troop withdrawals, as many Democrats want.

"I think deadlines can work against us," Jones said. "I think a deadline of this magnitude would be against our national interest."

The review is one of several studies that Congress commissioned in May, when it agreed to fund the war for several more months but demanded that the Bush administration and outside groups assess U.S. progress in the four-year war.

The readiness of Iraq's security forces will be an important element in the continuing Congressional debate over the war.

Republicans see success by the Iraqi forces as key to bringing U.S. troops home, while an increasing number of Democrats say the U.S. should stop training and equipping such units altogether.

Senator Carl Levin, D-Mich., chairman of the Armed Services Committee, said the Commission's study challenges the Pentagon's assertion that more than half of Iraq's army and police battalions can operate in the lead, so long as they have U.S. support.

"It's my observation that fewer, far fewer, are actually now in the lead," said Levin.

"That raises questions, which I hope the commission will address, as to why more Iraqi units should not be given the lead responsibility that they are capable of now," he added.

The study found that the Iraqi military, in particular its Army, shows the most promise of becoming a viable, independent security force with time.

Worse off is the Iraq police force; the study describes them as fragile, ill-equipped and infiltrated by militia forces.

At the Pentagon yesterday, Maj. Gen. Sherlock said that the U.S. military does not believe the Iraqi national police should be disbanded but acknowledges that getting the Iraqi army up to speed will take time.

Sherlock urged reporters not to draw conclusions on the stream of Iraq studies released in recent days until next week.

And at a House hearing on "Next Steps in Iraq" today widely varying opinions were heard.

Retired Army Major General John Batiste described the current situation as a "lose-lose" situation, and that the surge coming "too little, too late" was merely a minor reinforcement for an Iraqi government "incapable of stepping up."

"At worst, the surge has had little affect on countrywide violence," Batiste said. "At best, Iraq is in a holding pattern dependant on the U.S. military to control the violence. This is a no-win situation."

"We are seeing the myth of Sisyphus being carried out again and again."

Retired Gen. John Keane said that what he witnessed during a two-week visit to Iraq was that security was beginning to improve.

"In terms of quality life issues, things have changed," Keane said. "When I talk to Iraqis, they don't want us to go."

Keane disagreed with the benchmarks being used to measure success. "I think the national benchmarks are unrealistic," he said. "We browbeat the Iraqis into these benchmarks. I think some patience has to be shown."

In the face of a flurry of government reports criticizing the level of progress in Iraq on many levels, Pentagon spokesman Major General Richard Sherlock similarly asked for patience until Gen. Petraeus' and Ambassador Crocker's presentation next week. "I think they will bring in a variety of different factors into that assessment," he said.

Sen. Robert Byrd, D-W.Va., seemed to have little patience: "Standing down only after Iraq is ready to stand up seems to be a recipe for an unending Iraqi occupation."