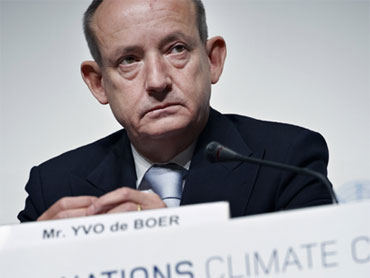 Some 40 nations agreed Tuesday on taking individual steps to fight global warming, but made little progress during a three-day meeting near Bonn toward drafting a new international climate change treaty.

Germany and Mexico, which co-hosted the meeting of environments ministers, said it had been an important step on the road to the next major U.N. climate conference in Cancun, Mexico, in December although the most difficult issues remain unresolved.

"I would call this meeting very fruitful," Mexican Environment Minister Juan Elvira said in his closing remarks. "We want to use this momentum to make the conference in Cancun a success.'' Mexico plans several more rounds of formal and informal talks before the conference.

The meeting made headway on several sticking points, including saving forests and transferring climate technology from rich to poor countries, said Germany's environment minister, Norbert Roettgen. A final agreement on these topics is now within reach, he said.

"There is movement, no one can deny that," Roettgen said. However, the toughest issues cutting greenhouse gases, creating a system of financial aid from rich to poor countries, and measuring both still need consideration.

At the meeting, ministers specifically discussed individual projects that could help reduce emissions or help cope with the effects of climate change, such as drought, flooding or heavy storms.

South Korea, for example, presented its Global Green Growth Institute, which will give developing nations advice on low carbon growth, the German minister said, while the U.S. and India are working on a project to make appliances more efficient.

France and Norway have a plan to get both rich and poor nations involved in stopping deforestation, and Germany wants to allocate euro350 million ($458 million) on forests from the euro1.2 billion it pledged for fast action, Roettgen said.

But environmental groups warned the global climate talks were still deeply troubled after the latest U.N. conference in Copenhagen last December, where a deep rift showed between industrialized nations and developing countries.

"Fundamentally, the difficult situation we had in Copenhagen has not changed,'' Greenpeace climate specialist Martin Kaiser said.
The Copenhagen conference was seen as a major disappointment, failing to reach a new legally binding treaty after two years of U.N.-sponsored negotiations.

Instead, it ended with a political declaration called the Copenhagen Accord, brokered at the last minute by President Barack Obama, but many of the 190 or so countries that attended were unhappy with it and some dismissed it outright.

Greenpeace warned that, until the U.S. has a climate law in place, real progress on drafting a new treaty will be tough.
"President Obama's climate policies have failed, and therefore there is no basis for an ambitious international treaty that could bring India and China on board,'' Kaiser said.

Outgoing U.N. climate chief Yvo de Boer has said he does not expect a comprehensive international treaty to be finalized this year in Cancun.
Parts of a treaty such as deals on forests or technology transfers might be agreed by then, though, Roettgen said.

De Boer said this week's meeting showed "a very strong desire of ministers to reinvigorate the process.''
He urged ministers to stay involved instead of leaving negotiations to experts.