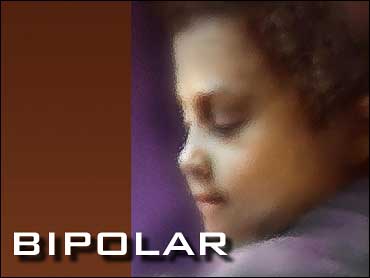 A child bumping her head on the wall, pulling her hair and screaming at the top of her lungs was not having an ordinary temper tantrum. Her parents found later on she was suffering from bipolar rage.

Bipolar disorder in children includes rapid cycles of mood swings from happy to rage. Judith Lederman, a mother of a bipolar boy and the co-author of the recently released "The Ups and Downs of Living With a Bipolar Child; A Survival Guide," offered some advice for parents on The Early Show.

She says if you recognize symptoms of bipolar disorder in your child, the first thing to do is seek professional advice.

One of the problems parents often face is misdiagnosis. Sometimes, this bipolar condition happens in conjunction with something else, like depression.

Lederman says, "Often, the first line of defense is to go to the pediatrician, and the pediatrician may not be familiar with this diagnosis. It's up to the parents also to educate themselves to find out about bipolar disorder and to bring the literature to their pediatrician, if that's all they've got. If they can't get to a child psychiatrist, but they need to be treated by someone who is familiar with this, who has seen it before, and who knows how to distinguish between the nuances of all the different child psychiatric disorders," she emphasizes.

Also important, she says, is to look at the family history, to determine if it includes alcoholism or bipolar disorder. But realistically, she notes, "You may not have documented bipolar disorder in the families. In the old days, people didn't go to psychiatrists, or if they did, they didn't talk about it. But you might notice that Aunt Mary was always hard to get along with and cut off all her options and spent down her credit cards or whatever. You might know that Uncle Henry ended up homeless. If you have that sort of thing in the family, you can almost bet that there is a problem."

Once that is determined, parents have to confront the question of whether or not to medicate their child. There has been very little research on these medications and how they affect children.

Lederman says, "I believe if a child needs medication, whether an illness like diabetes or cancer or mental illness, you have to give them medication."
But she notes, parents have to make the decision on their own.

The fact of the matter, she says, is this is a condition that worsens over time, so get help.