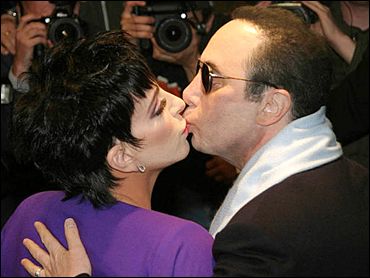 Liza Minnelli's breakup with David Gest was caused by a tabloid article, not alleged physical abuse, the producer said in an interview to be broadcast Friday.

Gest, who has been staying in Hawaii since the split, told "Dateline's" Stone Phillips that Minnelli "beat me and hit me everywhere," but it was a National Enquirer article portraying his estranged wife as an alcoholic that led to the relationship's end.

"She got the magazine on a Wednesday morning and on Thursday announced our marriage was over," Gest said in the NBC interview, according to a news release from the network.

The 50-year-old Gest denies having anything to do with the tabloid report and said he might still be together with the 57-year-old Minnelli had it not been published.

Minnelli and Gest married March 16, 2002, at a celebrity-studded ceremony that featured best man Michael Jackson carrying the bride's train and Elizabeth Taylor serving as maid of honor. They separated in July 2003.

Gest has filed two legal actions against Minnelli: a divorce petition and a $10 million lawsuit in which he alleges she beat him so badly that he suffered permanent injuries.

Gest says Minnelli's beatings caused him pain "so enormous that I get now 80 shots around the head to deaden the nerves," according to the NBC release. Minnelli denies the abuse.

Meanwhile, Minnelli has sued Gest, charging that he stole money from her. She's seeking at least $2 million in restitution, a financial accounting, legal fees and a court order for Gest to preserve all financial records related to her.