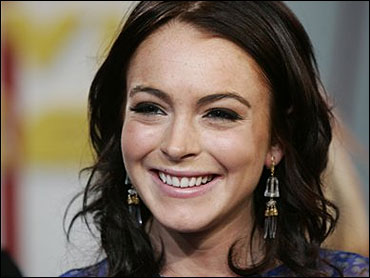 Lindsay Lohan became a teen idol with family friendly movies such as "The Parent Trap" and "Herbie Fully Loaded." More recently, the 19-year-old actress has made headlines for crashing cars and becoming shockingly thin.

In the latest issue of Vanity Fair magazine, she admits she's used drugs and been battling bulimia.

Will the truth hurt her career?

Two experts say, if anything, the opposite is likely.

Evgenia Peretz, the Vanity Fair contributing editor who interviewed Lohan for the article, and People magazine Senior Editor Jess Cagle, who's also a regular entertainment contributor for The Early Show, agree that Lohan coming clean may help her career in the long-run.

"I think Lindsay was most revealing about her eating disorder, actually," Peretz

tells
CBS News. "She was very open about that, and she really said, 'I could have died.' "

Peretz says Lohan described to her how her illness developed: "She was hospitalized during the filming of 'Herbie Fully Loaded' and, while in the hospital, she lost a lot of weight, and when she got out, she really liked how she looked, and she continued to diet, and she also had bulimic episodes. And she really took it too far.

"She went on 'Saturday Night Live' and Lorne Michaels had a very serious talk with her, saying, 'You really need to take care of yourself.' And I think this really made a big impact on her."

Peretz says Lohan also confessed to her that she had taken drugs: "She admitted that she's used some drugs she wouldn't really specify. And she quickly said that she's gotten this out of her system.

"I don't think it will affect her career in any negative way. I think, if anything, it will make people in Hollywood a little more sympathetic to her, given what she's been through and the fact that she's 'fessing up to a lot of this."

Cagle agrees, telling The Early Show co-anchor Julie Chen Thursday, "The article is very sympathetic toward her. And she is actually a very talented young woman.

"I think she does have something to gain by this because she has humanized herself. She admitted the problem. And the public likes nothing more than a star who has gone through some kind of redemption.

"I think the downside would be, the cat's out of the bag. And now she really has to tame it. Because nobody is going to be handling her with kid gloves now because, 'Well, we don't know for sure if there were drugs or there was an eating disorder.' So she cannot appear to be that person who is dabbling in drugs or has an eating disorder anymore.

Cagle says that if she does that, it will only help her.

"And she's also trying to grow up in movies now," he adds. "She's doing a Robert Altman movie with Meryl Streep, another movie with Anthony Hopkins, so I think her career is totally fine. She's working a lot. People really do want to work with her in Hollywood."

Was anything about this surprising?

"The eating disorder was pretty apparent," Cagle says. "She was way too thin. And rumors of her dabbling in drugs had also been around. So that is not surprising. I think it is surprising that she is talking about it so frankly."

Lohan is in a Miami hospital right now, recovering from what her family says was an asthma attack.

"This hospitalization was terrible, terrible timing, just because it's going to raise all that speculation," Cagle says. "But we do know that she suffers from asthma and she was out at, probably, a smoky nightclub on New Year's Eve, so we have to give her the benefit of the doubt there."