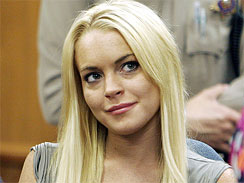 LOS ANGELES - Lindsay Lohan's attorney said Saturday that her client did not steal a $2,500 necklace and would fight any charges if they are filed.

The statement from attorney Shawn Chapman Holley was the first official word from the actress' camp since police revealed they were investigating the troubled starlet for grand theft.

"We vehemently deny these allegations and, if charges are filed, we will fight them in court, not in the press," Holley said.

Kamofie & Co., a Venice custom jewelry store, reported the necklace stolen on Jan. 22, roughly three weeks after the actress was released from three months of court-ordered rehab at the Betty Ford Center.

Jeweler: We Did Not Lend Necklace to Lindsay Lohan

Police obtained a search warrant Tuesday to try to retrieve the necklace from Lohan's house, but the item was turned in to detectives before the warrant could be executed.

If she is charged, the case would be the latest problem for the actress, who has struggled to comply with the terms of her probation for a 2007 drunken driving case.

Judges sent her to jail last year twice for violating her probation, and a judge has threatened to sentence her to up to six months in jail if she cannot stay out of trouble.

Prosecutors in Riverside County were also considering pressing battery charges against Lohan for a December altercation with a rehab worker at the Betty Ford Center.

The "Mean Girls" star was due in court on Feb. 25 for a probation status hearing.

The treatment, her fifth rehab session, came after she admitted failing a drug test shortly after being granted early release from another treatment program.